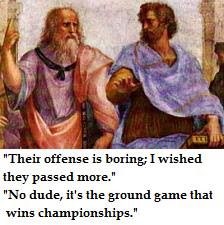 Yesterday Tony Jones posted a brief reflection on ecclesiology, decrying Jurgen Motmann as too “idealistic” and saying that he’s “exponentially more grounded than Milbank, Hauerwas, and the other ecclesiologists on the scene today.”  Though he never mentions Plato by name, Jones’s point is one that often comes up just before a writer distinguishes himself from “Platonic” or even “Hellenistic” thought of one sort or another.  The assumption seems to be that an articulation of how a community ought to function is automatically a betrayal of how the community actually is and therefore renders the ideal-maker incapable of engaging with real people in their real communities in the real moment.

Jones goes on to drop his title phrase, writing, “Every congregation is dripping with culture.”  His idea is that “second-order theological discourse” does not actually reflect the way that people describe their own experiences of the divine and thus do not have any place in the ways that people talk about ecclesiology.  And he’s not a lone voice: in conservative as well as liberal circles there’s a certain allergy people seem to have to Plato in particular and idealist moves more generally.

I realize that Plato is everyone’s favorite whipping boy: whether it’s biologists or rhetoricians, economists or psychologists, everyone likes to take pot-shots at old flat-head.  And even though I don’t think of myself as a Platonist (Thomist or Augustinian, maybe, but lately, I fear that I just protest too much, and people are going to make me a Platonist, will me or nill me), I do think that the old man deserves to be taken on his own terms rather than being turned into a straw-man.

But that’s for another day.  Since Plato’s name didn’t come up in Jones’s post, I’m going to follow suit and keep this impersonal, making a brief defense for old-style idealism.

Setting aside for a moment the contention that Hauerwas’s or Milbank’s or anyone else’s theology purports to be “outside” of “culture” (I really haven’t seen that claim in any of their books, but I haven’t read all of ’em), I’ll note that the point of idealism in ethical and political philosophy is not to find somewhere in historical existence a facsimile of the “ideal” way of doing things, then abandon other forms of political and ethical existence as “non-ideal,” but to shape a set of tools for evaluating this cultural phenomenon and that cultural phenomenon, to say that this one is better or worse than that one, and that for the sake of changing or resisting change based on thought-out criteria rather than resorting to knee-jerk novelty-lust or knee-jerk nostalgia for anything that appears it might pass away. The alternative that idealism offers is a narrative framework in which things tend towards or away from goodness, therefore rendering them intelligible.  There’s always room for the good-that-we-imagine-now to be provisional, but at its root, some sort of idealism (whether it be Plato’s or Paul’s or Augustine’s or Marx’s) means that we can tell intelligible stories about change that’s good, change that’s bad, and change that’s mostly adiaphora.

In other words, if one has some sort of ideal in mind (and most actual idealists, as opposed to straw-idealists, are always happy to entertain better articulations of the ideal), one has better means available for saying, “We should resist that change because…” or “We should welcome this change because…” or “This change doesn’t matter all that much because…” and take some political responsibility rather than  becoming either creatures who follow fatalistically every pop-cultural fad.  Not that such creatures really exist: fad-chasers usually have some sort of Capitalist/libertarian ideology just underneath the surface, if one is willing to scratch.  In other words, even the fad-chasers usually have some sort of idealism, even a provisional idealism, just underneath the denial of idealism.

On the other hand, in most cases, to say that someone who resists any cultural shift is automatically one who does not “acknowledge culture” (Jones) is likewise a straw-man.  Almost always there’s some sort of intelligible content to “the old ways” that a conservative wishes to conserve.  To acknowledge culture might mean to welcome this change, and it might mean to stand in opposition to that.  The reasons for doing either have something to do with “change” as a universal category, but one should be careful not to reduce those who differ to “nothing but” those-who-have-not-embraced-change.

I realize that a brief blog post is probably not the hill on which to fight this sort of battle, that I’m making too much hay of a small field.  So be it.  This little defense of idealism is not meant to settle the question, just to show that my little provisional ideal, namely taking philosophies on their own terms, even if one disagrees with them, makes a certain kind of idealism intelligible, a certain dismissal of idealism less than honest, and further conversation possible.