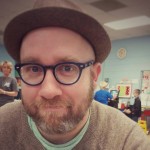 Join Danny as he welcomes Jay Eldred back to the show. Jay first brought up the subject of Christian Dominionism in our previous episode about David Barton. That topic seemed to warrant its own show, so here we are.

[Joe Carter, writing at First Things], has suggested that the very concept of a Christian Plot against America (I love Philip Roth) is conspiratorial nonsense. To the degree that there is an organized, concerted effort to enact a specific agenda, I agree with Carter. What his claim misses, however, is the fact that these Dominionist ideas are at their most dangerous not when they are attached to an organization, but when they manifest as un-examined theological beliefs within Christian popular culture. This episode explores that aspect of Dominionism.