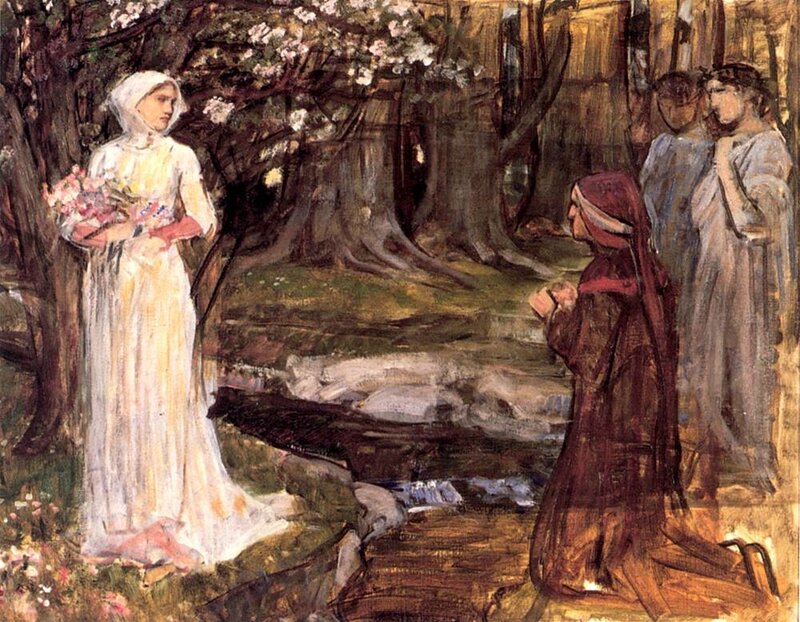 Rather than write a giant post about the last nine Cantos, I’m going to attempt two short ones, the last dealing mainly with Dante’s apocalypse.  If, as I plan, I can get these two posts knocked out this week, I’m going to plan on writing a brief series on Nietzsche’s Genealogy of Morals as I teach it for a summer course, then a brief series on Alasdair Macintyre’s After Virtue as I teach it.  But right now, Dante!

Where Babies Come From

I’ve said before that a great book, for my money, is a text that rewards multiple readings, and Dante once again proves to be just such a text.  In Canto 28, Dante asks Virgil why the shades among the Gluttonous look like they’re starving.  After all, Dante reasons, they aren’t really bodies, so their form should not suffer from deprivation of food.  Virgil’s response, the first few times I read the poem, struck me mainly as fodder for historicist inquiry: Dante lays out a basically Aristotelian theory of biological reproduction, adding a specifically Roman-Catholic understanding of the soul as something bestowed individually, by God, upon conception.  And even on that level, there’s enough of interest in Dante’s account to think on for some time: although there’s no sense of cell biology, nonetheless there’s a fairly sophisticated, integrated sense of how a human personality consists of animated body rather than some dualistic schema of ghost-possessing-machine.

This time around, though, I noticed something different, namely that Dante’s theology of desire is moving right along with the Thomist/Aristotelian theory of personhood.  The shades on the Terrace of the Gluttonous take their shape not because they need food (they’re not bodies, so they don’t) but because, when they died, their desire for food and drink overpowered their souls’ abilities to maintain a solid personhood.  In other words, the desires that we cultivate in the world of the living follow us to the afterlife, and for those on this terrace, those desires visibly distort the souls whose desires are thus disordered.  It’s a reminder, though a subtle one, that Purgatory, as Dante describes it, is always a gift, always something for the good of the saved sinner.  A person who went to Heaven with such out-of-whack loves would never be able to enjoy the eternal presence of God, and so divine grace gives them a chance to un-learn such things.

The same goes for those on the terrace of the lustful, of course: because people indulge their lust, in most cases, in secret places, those whose lusts are purged shout their own sins to the other groups of lustful souls.  So as they pass, one group shouts their hermaphroditic desire (Italian ermafrodito–the desire of man for woman or woman for man, a term borrowed no doubt from Plato’s Symposium) at those whose desire is homosexual, and vice versa.

Yes, there are gay people going to Heaven in the fourteenth century.

The public shame of shouting the exemplar-stories to other people makes up part of the discipline of this highest terrace; the other part is the consistent presence of searing heat.  No longer do these sinners worry that the fires within are going to have repercussions in a cool world–the world is hot enough for everyone involved.  With this final terrace of the disciplined sinners, Dante has taken in a full spectrum of disordered desire and seen the broad variety of ways that divine mercy would train the saved to desire properly.

Matelda, the Garden, and the Active Life

When Dante reaches the end of the seven terraces, he must pass through a wall of flame to move on.  As first-time reader several years ago I had no idea what was going on at this point, but when Dante emerges from the other side, neither his clothes nor his body damaged, he finds himself in the Garden of Eden.  The flames were the same ones that God had set at the boundary of the garden at the dawn of creation, and only because his sins had been purged and his desires rightly ordered could he enter in.

In the garden the pilgrim encounters a young woman, later identified as Matelda, who plays the allegorical foil to Beatrice.  Where Beatrice stands as the figure of contemplation, Matelda represents the active life.  This latter-day Mary-and-Martha pair reinforce, here at the end of Dante’s earthly journey, the goodness both of the work of cultivating the garden (and by extension all human work) and the goodness of intellectual meditation on divine things (and by extension all human intellectual life).  As Dante moves along inside the garden, he is fascinated by but never taken by lust for the young Matelda, another sign that his existence has entered into a different order from what he experienced among the living.  (One assumes that he went back to being prideful and such when he returned to his earthly exile, but I don’t see any discussion of that in the poem itself.)  Still, he wishes he could cross the river running through this earthly Paradise to join her in her work, a detail that rises in importance as Purgatorio ends.

Matelda explains to Dante that the river he can’t pass is none other than the river Lethe, where sinners forget the evils of their mortal existence.  When a sinner’s desire is for God alone, the memories of the earthly pain and suffering and guilt still remain, but the Lethe removes those so that the soul can enjoy its ascent into heavenly Paradise.  However, Dante still cannot enter into those waters, for reasons that will become apparent in the final stretch of Purgatorio.

I realize that the previous post in this series never did pose questions, and perhaps at some point I’ll backtrack and rectify that, but for the moment, here’s what I’ve got:

The final installment of this series should be up tomorrow or Friday.  Thanks, all, for reading along!