Faith in Writing: Essays in Honor of Jack Knowles 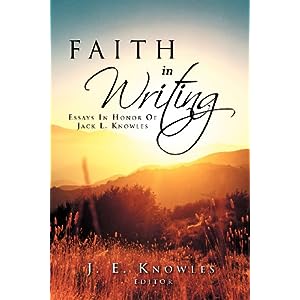 Faith In Writing: Essays In Honor Of Jack L. Knowles

I’ve now seen photos in which Jack is holding this book, so I can announce it without ruining the surprise.  Since the Table of Contents is not available on amazon.com yet, I figured I’d reproduce it here.  Readers of the Christian Humanist should find at least one name familiar, and those who have ties to east Tennessee might just find several familiar names:

Faith in Writing: Essays in Honor of Jack L. Knowles

“The Dream of the Rood”: A Model for Christian Meditation

Dante and Desire, or What an Evangelical Youth Group Kid Stands to Learn from a Walk
through Purgatory

“Like the Ooze of Oil/ Crushed”: A Christological Clue in Hopkins’s “God’s Grandeur”

Journey of the Magi: A Personal Meditation

I Loved My Children’s Bodies

Friendship and Beauty in the Midst of the Mundane: Reflections on Crossing to Safety

Faith in Writing/Writing in Faith

Alright, I’ll stop being coy: those of you who didn’t go to school at Milligan College or Emmanuel School of Religion (now Emmanuel Christian Seminary) should know that I’m by far the least among these: the other contributors are veteran professors, folks who teach and who have retired as named chairs of theology and humanities, current and former seminary presidents, published novelists, and otherwise very distinguished company.  How I got invited to this party is beyond me.

But listeners to the podcast know that I’m Forrest Gumping it through my academic career, so no surprise there. 🙂

Jack Knowles, in whose honor we all wrote, taught the first college class that I ever attended.  (Yes, it was also the first class on my schedule.)  He taught me Virgil and Dante, and he also introduced me to Herodotus and Thucydides and Plato and Aristotle and Calvin.  He was also the first to teach me King Lear and Othello, though certainly he wasn’t the last to teach me better to read those plays.  Knowles remains, in my imagination, the picture of even-handed, responsible learning, and he was one of those who most influenced my own desire to be a specifically Christian intellectual.  I’ve only read my own essay in this collection (I wrote it too), but I have to think that those who taught alongside him likewise value his career.