Lawyers and Poets: A Review of The Gospel You've Never Heard for the Ooze Viral Bloggers 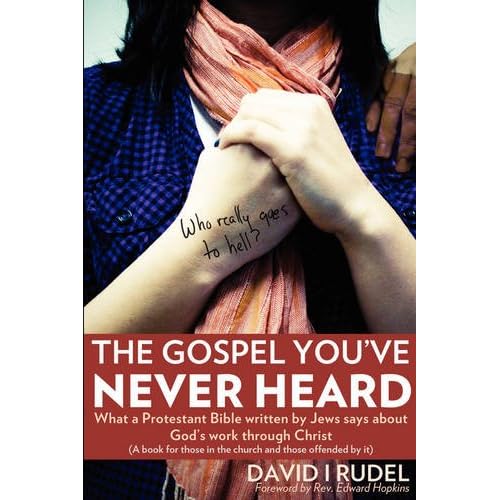 Who Really Goes to Hell?: The Gospel You’ve Never Heard: What a Protestant Bible written by Jews  says about God’s work through Christ: A book for those in the church and offended by it
By David I. Rudel
188 pp. Biblical Heresy Press. $11.00

First of all, I must start by saying that rarely have I found a book so enamored of subtitles.

Beyond that, I do wish that theology writers for popular audiences would attempt a bit of humility.  The material in this book is not a gospel I’ve never heard; in fact, much like “A New Kind of” this and that, this book sets forth interpretations on things whose influences were easy enough to spot.  Very few thoughts in 2010 are entirely new, never-before-heard, or otherwise paradigm-shifting.  By virtue of the instant digital connections that characterize the publishing and academic worlds in 2010, what new thoughts do happen (and I’m one of those historicists who thinks that nihil sub sole novum gets used far too often to justify intellectual laziness) tend not to happen in popular-press books.  (As a thought experiment, imagine if someone wrote a book on physics claiming to articulate a theory that the world had never seen before.  It would take some gumption to claim that, wouldn’t it?)  I realize that some folks who have never been to seminary or sat in on a Sunday school class taught by a seminary graduate might never have heard this material, but I’d prefer to see theology books (even those with three subtitles) whose titles say what’s inside rather than trying to convince a reader that what’s inside has never been seen before.

Rudel, a mathematician, approaches questions of salvation and judgment in a way that reminds me of that famous ancient lover of mathematics, Plato.  Both writers have a keen eye for the contradictions and sloppy thinking that pervade popular religion.  Both writers force a careful reader to think about and answer hard questions.  And both writers offer answers that are themselves a mix of profound insight and strange misreadings that sometimes provide nice springboards for further thought and other times force that reader to articulate better answers than what are in the text.

All of that said, this is not by any stretch a gospel that I’ve never heard.  N.T. Wright was setting forth a historically-informed reading of canonical text a couple decades before this book hit the presses, and Richard Hays was holding forth on the real ethical weight of the Sermon on the Mount and other New Testament texts when I was still an undergraduate.  The real content of this book is a polemic against a Calvinist-flavored version of evangelicalism, a focused reading of the canonical gospels and some brief forays into Paul and the General Epistles that take the gospel narratives as logically prior to the epistolary discourse.  This is one of the strange features of the book: at various moments Rudel almost seems to imply (though he never directly states it) that the gospels were also in some sense temporally prior to Paul’s letters, an assumption that lets him play Paul against Christ (rather than Paul against Mark or Paul against Luke) as a zero-sum game (36) but which seems to rely on a strange historical assumption.

Rudel’s main hermeneutical move is to draw a sharp distinction between regeneration, which happens here and now; and deliverance, which happens at the Final Judgment (42).  Because I spend my professional time thinking about poetry rather than legal precedents, this strong separation strikes me as neglecting some of the real beauty of the scheme of salvation, and I do think that the New Testament loses something when the Judgment and the indwelling of the Spirit are hermetically sealed realities rather than informing and constituting one another.  Beyond that, the forced separation forces Rudel to make some strange moves when he writes about the book of Romans (58-59) and  about the Eucharist (115).  Rudel cites many texts that support his case (though his decision to use a boldface font for every Scripture citation is a bit hard on the eyes after a while), and his attention to the details of the text serve him well when he writes about the apparent upshot of Jesus’ parables in the context of his larger preaching ministry (119-122) and his account of what constitutes Christ’s obedience that saves sinners (149).

Although his close readings of Scripture are good when they’re good, his take on the Church as it’s existed in the intervening centuries is decidedly more spotty.  As I noted before, Rudel’s concern in his book is to approach the Scriptures with theological “precision” (115) and to counter what he frames as bad propositional/syllogistic frameworks with more adequate ones.  (One moment that amused me, because I do read the Bible as poetic as well as true and probably more true because poetic, is when he initiates an ellipse-filled citation of Galatians with, “Removing some rhetoric…” (139).  As someone who has recently taken on the role of rhetoric scholar, I had to wonder why in the world one would want to remove some rhetoric from Paul!)  Therefore he’s not quite sure what to do with the generations of Christians from Paul’s generation (remember, the gospels are prior to Paul in his reading) roughly to the age of Protestant Orthodoxy.  On one hand he criticizes them for allowing ambiguity to characterize their theology (138), but on the other, he praises them for being “less indoctrinated” (145) than their modern-era counterparts.  He gets much more comfortable with Reformed and Evangelical writings from the last four hundred years, give or take, and some of the amusing moments in the book are  when he attacks evangelicalism in general for using some very distinctively Reformed-Calvinist language, namely propitiation (160) and “alien righteousness” (140).  One doesn’t have to guess too long which sorts of evangelicals Rudel spends his time with.

On balance I think (as I often do) that the strong questions about the canonical gospels, though I have heard them before, are worthwhile as a popular-press introduction to some interesting close-readings of the gospel texts.  Because I’m a Sunday school teacher I imagine many books as potential Sunday school or small group texts, and I think that a strongly educated teacher could use this book on one of those settings profitably.  Perhaps it’s a gospel that those of us who presume to teach have heard, but nonetheless it might be a good locus of conversation for those who have not.

← Wisdom of God, Spirit of God: A Reflection on the Lectionary Readings for 30 May 2010
"Civil Disobedience" and Political Cowardice →