WHO ARE THEY? I don’t know the actual story, but I like to think that Marc Byrd and Christine Glass fell in love when, no doubt through the influence of The Choir’s Steve Hindalong—she sang backing vocals on Delicate Fade, the second album from Byrd’s band Common Children, a harrowing testament of his divorce from his first wife. That narrative certainly fits with the public facts of their relationship: She did perform on that album, and a few years later, they were married and frequent collaborators.

Both of them were fairly well-established as recording artists before releasing their one full-length collaboration, 2003’s Open Wide This Window (credited, appropriately enough, to GlassByrd). Common Children released three albums, two of which are genuine alt-rock classics; Byrd was soon to join The Choir and begin recording atmospheric post-rock with the band Hammock. Glass had released two solo albums, both of which made a few waves on Christian radio without making her a bona fide star.

Open Wide This Window, oddly enough, was never followed by a sequel, although Glass continues to perform on almost every album with which Byrd is involved. Hammock has largely escaped the Christian-music ghetto—while Byrd has also done quite a bit of work with the more adult-contemporary sides of that same ghetto. This essay will not cover the Hammock albums—there are too many of them, and I haven’t listened to them—nor will it cover Byrd’s work with The Choir or the City on a Hill series. Instead, I’ll focus on the three Common Children album, the two Christine Glass albums, and Open Wide This Window.

WHY DO I KNOW THAT NAME? Well, I talked about Byrd in my write-up on The Choir. But you also might know him as the co-author of the modern worship classic “God of Wonders.” You are less likely to know Christine Glass, although Wikipedia says that her song “My Love Will Get You Home” is frequently played on Chinese television for some reason.

WHAT’S THEIR BEST SONG? Common Children’s “Entertaining Angels,” from The Inbetween Time, a perfect expression of a feeling that you can really only have at 2 a.m. in your early twenties. Children’s second album must have seemed like a shock to anyone who had spent much time with their debut. They bleed slowly into the gentle arpeggios of “Stains of Time,” a song that bleeds and shines but refuses to explode. There’s plenty of time for explosions on Delicate Fade, but Byrd wants us to know that he has other moods—more important moods, as it turns out.

Delicate Fade is heavily informed by the breakdown of Byrd’s first marriage, and yet it rarely feels like a divorce record. He vents in some places, most notably on the excellent “Indiscreet” and the twin tracks “Burn” and “Pulse” (the only songs here that could uncontroversially be called grunge). But for the most part, he is searching for grace, and pondering the illimitable mysteries of the universe, and he does so through textured, melodic, mid-tempo art rock.

More than anything, he seems interested in his divorce as a concrete example of the mess that the passage of time makes of our plans. “Like water,” he sings at the end of the title track, “it’s all slipping through my hands / Forever, our lives erode with the sands / Fade out, fade out.” Not for nothing does “Stains of Time” find him “standing in the aftermath of grace”: It’s a horrible grace, the grace of a life that is, in being lived, inching ever toward oblivion.

The emotional climax of the album comes at the very end, in a triptych of songs: “Drift,” “Blue Raft,” and “Storm Boy.” If my memory is correct, his marriage ended, Byrd was essentially homeless during the recording of Delicate Fade, sleeping on a blue air mattress on the floor of Neverland Studios. These songs track his progress—and what’s important is that there is progress. Byrd’s despair pushes him forward: “Show me a way out of here,” he repeats at the end of “Drift,” where “Storm Boy” ends with the observation that “We stumble through the back roads of our lives.” Delicate Fade is a picture, or series of pictures, of those back roads, and it’s a testament to Byrd’s faith as much as his artistry that we feel his hope and his despair in equal measure.

Love and Poverty (Christine Glass, 1999). Glass’s first album feels like the product of market forces; her second feels much more personal (and thus much less dated). Produced by Byrd and Steve Hindalong, it operates, for the most part, in a jangly, folk-rock mode, with Glass’s 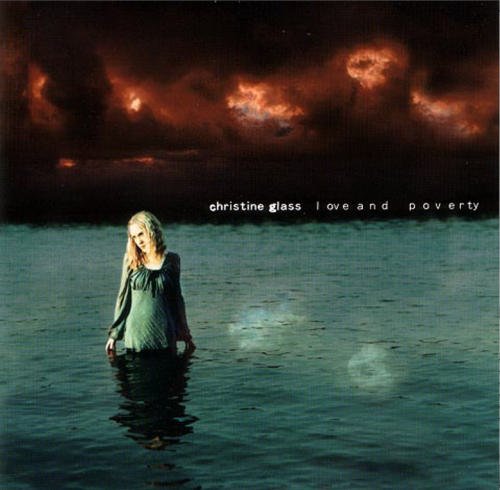 whisper-soft, feather-light vocals floating on top of the instrumentation. The songs—many of them co-written by Byrd and Hindalong—are also much stronger than those on Human. “Poverty,” for example, meanders pleasantly in a way that nothing on her first album could have, and “The Way You’re Calling” and the oddly New Order-esque “Breath of Life” clatter along very effectively. Glass’s melodies work perfectly with her voice.

The stand-out, though, is “Waterfall,” another Glass/Byrd collaboration that prefigures some of the poppier moments on Common Children’s The Inbetween Time. The rubbery electric guitars bend and swerve around Glass’s multitracked vocals—it doesn’t exactly sound like a waterfall, but it certainly creates a negative space for one. I should also mention the strange Renaissance arrangement of Song of Solomon 8:7 that closes the album. I’m not sure I like it—but I always appreciate a relatively straightforward artist like Glass trying something weird.

It’s really a shame that this was Glass’s last album as a solo act; with Byrd’s and Hindalong’s help, Love and Poverty demonstrates the degree to which she had already found her own distinctive voice.

The In-Between Time (Common Children, 2001). The final Common Children album largely builds on the template set out by Delicate Fade, to the point where its opener, “Absence of Light,” is basically a sequel to “Stains of Time.” The major difference is that Byrd and Andrew Thompson (who joined the band for this album and who would soon form Hammock with Byrd) surround the songs with atmospheric guitar work. The atmospheric tracks can get a little samey, however, especially given the way that Byrd’s melodies have always tended to run together. The In-Between Time is at its best when it’s heaviest and poppiest: the aforementioned “Entertaining Angels,” but also the Steve Hindalong tribute “Free,” the yearning “Always on the Outside,” and “So Mysterious,” dedicated to Christine Glass.

Human (Christine Glass, 1997). Glass’s debut aims itself squarely at the shiniest parts of the post-grunge alternative era. She looks like Shirley Manson on the cover, a resemblance that is born out by the record’s more electronic touches (especially the trip-hoppy “Shadows”). Her vocals more often recall Dolores O’Riordan, a cheerier Alanis Morrisette, or perhaps a crunchier Sheryl Crow—the single “Crazy All Around” certainly adopts the spoken-word verses of “All I Wanna Do.” There are also a number of songs, like “Waves,” that verge on adult contemporary—no doubt a product of the Christian radio of the era, which didn’t have a lot of space for rock artists, particularly not female rock artists. I think the second half of the album is pretty tedious, but my wife loves Human, danced around our apartment when I played it for her, and wishes she’d had the CD in 1997.

Skywire (Common Children, 1996). I had remembered Common Children’s debut as rather typical grunge in the Nirvana/Bush mode—and some of the songs (especially “Man” and “Hate” are just that). But there are more glimpses of things to come than I had thought. The second song, “Wishing Well,” could have appeared on Delicate Fade, and the chiming, echoing guitars at the beginning of “Dual Lens” prefigure Byrd’s work with the Choir and Hammock. Even so, Skywire is mostly by-the-numbers mid-‘90s angst, especially the vocals, which largely fail to impart any memorable melodies. Andrew Thompson’s bass is great, and there are flashes of brilliance in the guitar work, but Skywire can’t transcend its genre.

Open Wide This Window (GlassByrd, 2003). Unfortunately, Glassbyrd’s only album is rife with the sort of glossy pop/rock worship that dominated Christian radio at the time. (Maybe it still does—the only time I hear Christian radio is when I walk past by college cafeteria, and it usually makes me move faster.) It’s nice to hear Christine Glass sing lead on a few songs, but other than that, Open Wide This Window is at its best when it sounds like a lighter, less-interesting version of Common Children—as on the opening two tracks, “This Window” and “Tonight (I Want to Live in Your World).” Damning with faint praise, indeed.

With only six albums between the two of them, Byrd and Glass have no need for a greatest hits collection.

Common Children put out a limited-edition live album, Setlist, between Skywire and Delicate Fade. It’s so rare that not only have I never heard it, I can’t even find a track listing on the internet–but Wikipedia says that it features the entire Skywire album and two songs from Delicate Fade.

Byrd and Glass’s most notable “side project” is their work with the Choir. Byrd has been a full-time member since the release of O How the Mighty Have Fallen in 2005, and Glass has, I believe, sung on every record since 2000’s Flap Your Wings, including Live and on the Wing in Music City, where she gets off a zinger about the band between songs. Byrd has also played in the ambient/post-rock group Hammock for a decade, along with Glass and several other members of Common Children.

1 comment for “A Primer on Christian Alternative Rock: Marc Byrd and Christine Glass”