Eternal Possibilities: A Review of Heaven, Hell, and Purgatory for Brazos Bloggers 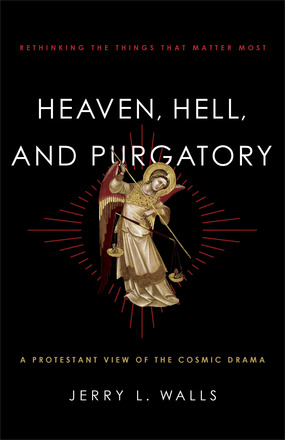 Heaven, Hell, and Purgatory: A Protestant View of the Cosmic Drama

Written theology, in my own experience with the faith, serves me differently during different seasons of life, and I’ve noticed that the benefit I derive from theology books is basically Aristotelian in character: the books that benefit me in one season push me away from this harmful extreme in my theological thought, but books that push in precisely the other direction stand to help me in other moments.  Sometimes I need reminded that some philosophical categories need to give way to the narrative particularities of the Bible, and sometimes I need reminded that precisely Greek or German or even Scottish philosophy might help me to be the sort of reader who can read Scripture faithfully.

I realize now, having read Heaven, Hell, and Purgatory, that for some time I’ve been compartmentalizing my own theological reflections on what happens when human existence as we know it ends.  Sometimes I try to think as a Dantean and sometimes as a late-modern student of the New Testament and sometimes in the mode of Cappadocian thought that David B. Hart recommends in The Beauty of the Infinite but rarely in all three of those registers at once.  I wasn’t entirely aware of it, but Jerry Walls brought to my attention that I’ve not dedicated much thought to how those two ways of thinking might inform one another.

Such is precisely the project of Jerry Walls’s career, and he has brought the work that went into a life’s work on the theology of the afterlife, a volume each on Hell, Heaven, and Purgatory, into this readable and fascinating book.  The most satisfying thing about this book is that Walls moves precisely in the order that the title promises, beginning with a theology of Heaven rooted firmly in the text of the New Testament and the scholarship first-century notions of resurrections that students of N.T. Wright will find familiar.  With that in place, he suggests a theology of Hell strongly informed by Dante and C.S. Lewis but which also takes into account that whatever the final beatitude of the redeemed might be, it must be a return to a re-created “earth at its best” (40), not an escape from the world of matter.  Finally he makes a case for Purgatory not for Catholics only (or mainly) but for all who profess the sort of “mere Christianity” that was C.S. Lewis’s famous aim in his radio talks, a plea rooted in Biblical categories and aimed at evangelicals.  Along the way he not only makes a strong case that just about everyone who believes in Heaven also believes in some kind of Purgatory (whether it’s instantaneous or involves duration) but follows that up with a strong argument that Protestants should rejoice in this particular inheritance from medieval theology.

And that’s just the first half of the book.

In the second half Walls addresses problems with the doctrines of the Resurrection and Renewed Creation (which is inextricable from his account of Heaven) that arise from the problem of evil (especially as articulated in Dostoevsky’s The Brothers Karamazov), proposes a theology of divine gift that reconciles the philosophical notion of altruism with confession of rewards and misery in the afterlife, and articulates a theology of postmortem repentance that insists that indeed no power, neither life nor death, can ultimately stymie divine love, though the possibility for refusal remains ever-present.

This is a book I needed to read.  I’ll admit that I tended–and perhaps still tend–to read the theologies of free will that I find in Dante and C.S. Lewis as historical artifacts and perhaps allegories for human existence but not as serious engagements with the New Testament, which I tended–and perhaps still tend–to read as somewhat insulated from the centuries between the first and twenty-first.  This book reminds me what I’m supposed to be about as an intellectual, certainly learning from the best of contemporary, historically-conscious scholarship but never cutting off the possibility of learning to read the Bible more faithfully from the least likely of discussion partners.  (And for someone trained in late-modern Biblical studies, the least likely partners might just be the medievals.)  Jerry Walls gleefully ignores the artificial–do I say walls?  Yes I do–walls that separate us Biblical studies folks from us medievalists when we talk God together.

Yes, you read that last sentence right.  This book is good medicine for me precisely because it invites me (as constituted by my Biblical studies education from roughly 1998 to 2002) to live at peace with myself (as constituted by my medieval studies from roughly 2004 to 2010), to seek not compartments but fruitful tension, to entertain possibilities for theology that happen when lions lie down with lambs, the clean with the unclean, the Greek and the Scythian, and yes, the Old Testament student with the Plato reader.  I recommend this book for anyone who would like to see what those sorts of creative tensions are free to do what they do.