A Different Take on History: A Review of The UNKingdom of God for SpeakEasy Bloggers 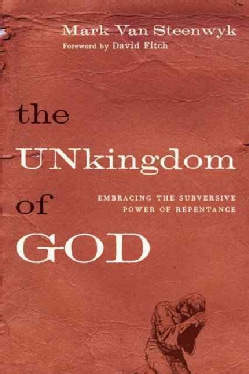 The UNKingdom of God: Embracing the Subversive Power of Repentance

The New Testament deals with empire at every turn, whether the centurions and the tax collectors and the crosses that define the written gospels or the thrones and dominions against which Saint Paul calls us to struggle in the closing parts of Ephesians.  In The UNKingdom of God Mark Van Steenwyk begins from the assumption that, in our own moment, a new sort of Empire has appropriated the symbols and vocabulary of Christianity, ripping them from their historical roots and pressing them into the service of Capitalism and militarism and nationalism.

This book’s main business, though, is not to lay out abstract global theories but to suggest ways to live.  After all, abstraction is a tool of empire (44), a way of thinking that allows the local and the particular to yield importance to grand global schemes for a “better world” without concern for what one can see at ground level.  Such abstraction leads people to worry about “illegal immigration” and national “territory” (52-53) instead of the human beings who need food and shelter and community, and it makes Jesus into a flexible icon to be made in our own image, a Scandanavian Jesus for white people and a free-market Messiah for consumers (58).

Van Steenwyk skillfully maps the alien into which modern American culture has drawn Jesus, even if his critical eye does not extend to his own intentional community’s ways of life.  For instance, the culture of public protest, which Van Steenwyk holds forth as a good matrix for Christian existence (13, 134-35), derives its intelligibility not from the culture of consensus that other parts of the book holds up as a good way to live but precisely from the culture of modernity that derives power not from convincing the unconvinced but making their lives uncomfortable enough that they concede to demands that they do not deem rational in their own right.  Such is not to say, of course, that someone couldn’t make a case for political protest as a valid form of Christian discipleship; this book just doesn’t do that work.

Along similar lines Van Steenwyk notes that he calls a local park “Oppressor Park” rather than Minnehaha Park and that his son has taken to naming it likewise (134).  Such subversive naming opens up the consciousness to the fact that the Americans celebrated at certain public shrines in fact won the land in wars and by trickery from the tribes that came before them, the Dakota.  But once again, that’s as far as the examination goes.  Relatively little further reflection goes into the possibility that the Dakota might not have been autochthonous, that they might have driven previous tribes out, or to the fact that the practices of Jubilee and distribution of land to families, both of which Steenwyk holds up as good precedents for economic justice (157-58) themselves rely upon a previous act of military conquest, even as that military conquest is the work of liberated slaves overrunning walled and economically stratified cities.  Once again, to thicken these arguments and to address these degrees of complexity are not impossible, but neither takes place in the course of this volume.

In broader terms, though I agree with this book that there is an anarchic strain running through the Bible (98), it stands in tension with other parts of the Bible which are just as much parts of the canon but which Van Steenwyk tends to dismiss by means of clever hermeneutical moves (see, for instance, his reading of Romans 13 as applying only to just rulers (106-7) or his reading of “render unto Caesar” as relegating nothing at all to actual human government (108-9)).  Such wouldn’t be as much of a problem if, in another chapter, he didn’t counsel that Christians submit to the discipline of asking themselves, “What excuses are stirring in our minds as a way of justifying that we shouldn’t do likewise?” (122)  In other words, Van Steenwyk is a very skillful critical reader of culture who seems unwilling or unable in this short book to turn that critical eye on the practices that his own community undertakes as a mode of contrast to the world.  Thus I find myself firmly in his camp at some points even as I wonder whether some more careful self-examination might not have resulted in a less strident book.

And there’s where I hang up as I decide what to think of this book.  I can affirm what Van Steenwyk and his friends are doing in intentional community, and my sense (and I think this is Alasdair MacIntyre’s influence) is that small communities dedicated to a particular way of life are precisely what the Church needs in a new digital dark age.  On the other hand, I’m not sure that another book pointing to one’s own way of life as truly and radically Christian, as opposed to other folks’ ways of life, is what anybody needs.  After all, with the right Facebook friends and blog subscriptions, there are plenty of opportunities to feel guilty about not being radical enough.  We didn’t need another.

So in sum, I’ll admit that I don’t know what to think about this book as a whole.  In most of the book I can join Mark Van Steenwyk’s rallying cry: we both see consumerism as one of the great vices of 21st-century Christianity, and neither of us finds much to commend in a vision of Christians’ encounters with our neighbors that goes as far as private charity but no further.  My own practices of Bible reading, like this book’s tend to see relationships between truth and power, between world-hoped-for and world-endured, and as a result, my ecclesiology, like Van Steenwyk’s, is semiotic to the core: the mission of the church is not merely to swell the ranks of the DNC or the GOP and claim Jesus as the spiritual motivation of the party but to challenge, in its modes of existence, the assumptions and the expectations and the power structures that the nation-state and the multinational corporation rely upon to keep their own existence intelligible.  And above all, I’m glad that Van Steenwyk’s community exists so that we have a way of life to behold and think on that isn’t more of the same thing, over and over.

But I can’t think those things without complication.  I tend to see the history of Christianity not as a global failure punctuated by moments of Francis of Assissi but as a story that begins in complexity and never gets simple.  Yes, the Church accommodated itself to the Empire, but it’s just as true that, in the middle ages, nothing like a Caesar cult or a practice of publicly crucifying one’s enemies were intelligible precisely because the Empire accommodated itself to the Church.  Van Steenwyk asserts that Christianity has been “an excellent imperial religion” (35), yet those in the Enlightenment and after decry Christianity as the fall of the Empire, and David Bentley Hart among others has argued that the trajectory on which Empire was traveling in the first century was bent forever away from its own glory by the rise and prominence of Christianity.  And I think of all monastic movements, in the Egyptian desert and the Gallic hills and the projects of Minneapolis, as always striving towards but never achieving the right sort of separation from and the right sort of service towards a corrupt world.  None of this is to say that one ought to be a cheerleader for Christian empire, but it does speak to a history more complex than what I see in this book.

Likewise I think that the Church can indeed learn a good deal from the mid-twentieth-century culture of public protest and consciousness-raising, but I also think that the thinly-masked cultural elitism of the protesting class is a profound danger to loving one’s neighbor.  In other words, while I can’t deny that this book is skillfully wrought, ultimately it describes a Christianity with a much simpler relationship to history than I can accept.  That doesn’t make this book anything other than worth a read, but it does mean that it leads me to more questions than to answers.

Of course, if you know me, you know that those are precisely the books that I find most interesting.

Disclosure of Material Connection: I received this book free from the author and/or publisher through the Speakeasy blogging book review network. I was not required to write a positive review. The opinions I have expressed are my own. I am disclosing this in accordance with the Federal Trade Commission’s 16 CFR,Part 255.

2 comments for “A Different Take on History: A Review of The UNKingdom of God for SpeakEasy Bloggers”