Metamorphosis: A Reflection on the Lectionary Readings for 2 March 2014 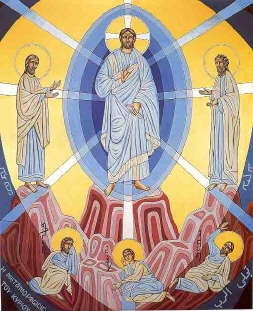 Obviously we should celebrate the Resurrection every year with a Sunday service dedicated to that story, and the Nativity also makes a good deal of sense.  Heck, even Palm Sunday as an annual reading has some good merit.  But the Transfiguration, among all the stories in the gospel, strikes me every year as an odd annual reading.  Perhaps I’m wrong about this, but take a moment to think of alternatives with me: why not Parable of the Sower Sunday?  Why not Temptation in the Wilderness Sunday?  Yes, I know these stories come up frequently enough in the Lectionary as it is, but they don’t have their own named Sunday, that’s all I’m saying.  But for reasons beyond my historical sharpness, we’ve got Transfiguration Sunday, and I have a hunch that we probably should.

The story’s antecedents aren’t hard to spot, even if one doesn’t have the corresponding Exodus and Psalm passages at hand (which, in the Revised Common Lectionary, one does).  Jesus here stands not only with two great men but with allegorical representations of law and prophecy, two moments in which YHWH appears to Israel on a mountain and initiates genuinely new encounters with justice and holiness and the divine.  Like Moses coming down from Sinai, the face of Jesus is brilliant, and Jesus does not merely appear alongside these figures, as if on parade, but talks with them, participating in the spoken word that has always been at the core of what Israel is and does.  Jesus in this moment straddles centuries and generations, encompassing the beginning of Israel as God’s people and one of Israel’s low moments, the idolatrous trough of the monarchical period, and of course his own moment, when YHWH would fulfill all that is written, from Moses to Elijah and beyond.

And what’s more, Heaven itself gets in on the telling of the new story.  I noticed on this reading something that had slipped past me before: in Matthew’s version at least, Peter does not wait for Jesus to appear alone on the mountain, after Moses and Elijah have departed from sight, but proposes the new Feast of Booths while law and prophecy remain.  And it’s still in the presence of Elijah and Moses that the voice from the cloud recites what the three disciples must have recognized as words from Psalm 2, the coronation Psalm.  What people in the countryside have whispered and Peter confessed, now a voice from beyond humanity proclaims: this is the Son of God, the completion of Kingship, the chosen one who will rule over nations.

Perhaps the end of the Transfiguration story is not as readily familiar as the oft-painted main event, but it’s important nonetheless: the disciples are to tell nobody about what they’ve seen until the Son of Man rises from the dead.  It’s a subtle shift from the Son of God to the Son of Man but an important one: the new Son of God will be neither a latter-day David, rejected by the authorities but beloved by the people; nor a Solomon, born into a prosperous moment and expanding that prosperity through wisdom and (many) strategic marriages.  Instead, the new king will be something like the Son of Man that Daniel sees, a messenger more than a tactician, one whose first function will be to carry the suffering and the indignation of a people hungry for justice before the throne of the Ancient of Days.  And bringing that Daniel-vision to its own fulfillment, this Son of Man will himself become the object of the world’s injustice, the victim of the ultimate crime, so that the power of Heaven will become manifest not at the head of an army but nailed to a cross.

May our prayers for the Kingdom drink in the transformation that Our Lord presents to us, year after year.

← House of Cards: A Tragedy for Our Moment
The Christian Humanist Podcast, Episode #127: Alfred Hitchcock →