Definitely a Go-To Book: A Review of Good News for Anxious Christians by Phillip Cary 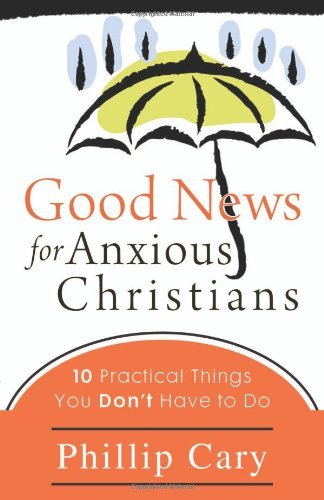 Good News for Anxious Christians: 10 Practical Things You Don’t Have to Do

Phillip Cary was one of the best guests ever on Homebrewed Christianity, and given the quality of the folks that Tripp and Bo bring on to that program, that’s saying something.  What I did not know when I listened to his episode was that the book on which his interview was based would become one of those “arm’s reach” books when I’m teaching my Christian college students.  But the book, which my mother gave me as a Christmas gift, is going with me when I return to the office tomorrow, and the next time I have a student worry about “finding God’s will for my life” or “letting God be in control,” I’m going to be sure that this book lands in said student’s paws.  (I’m one of those professors who lends books to students.  I might find myself regretting that some day, but so far, so good.)

What makes Cary such a Christian Humanist hero is that his book, as far as I can tell, relies almost entirely on arguments and elaborations upon arguments from sixteenth-century theological sources.  Although he does not directly quote much Luther or Calvin, those who know those good old Reformers will hear their echoes in every chapter, and Cary wields his learning lightly enough that they sound like they’re responding to Christian college girls as much as to John Tetzel.  Like some other books I’ve particularly liked lately, Cary’s argument draws on the resources of old books to address problems that have taken on new shapes.  And as anyone who listens to our podcast can attest, that’s just the sort of intellectual activity that we find compelling.

Cary names  his main target in the book “the new evangelical theology,” and it’s the sort of thing that should ring familiar with those who spend much time at all around young evangelicals (and by young I mean Baby Boomer or younger).  This is a theological phenomenon that seeks divine guidance from the inner recesses of the human heart, that calls into question even the best of human acts, wondering if they’re “really” done for selfish reasons, that looks for “God’s will in my life” and for the next great “mountaintop experience” to rejuvenate the soul.  Its sermons are heavy on “practical application,” and although its practitioners might never have read the phrase “moralistic therapeutic deism,” linking the two phenomena ain’t hard.  In short, this is the sort of mentality that too many of my own students, faced with changes of major and opportunities to study overseas, have to overcome when they drop in to my office.  Cary, a philosophy professor, encounters it mainly through assigned papers, and what he has read I’ve certainly heard.  This is a layer of guilt and anxiety overlaid onto traditional Christian confession, an obsession with the self (Cary argues this point particularly well) that renders moral responsibility and wise judgment far more difficult than they should be.

Cary’s goals in the book progress through stages: after he deals with those ideas that diminish the Christian’s responsibility to take the talents given and make something of them (he returns to that parable quite a bit), he gives the reader permission not to be anxious about self-examination (one should only do so after the fact, in a spirit of repentance, Cary suggests), and he finishes the book examining the structure of “the new evangelical theology” and noting its parasitism on nineteenth-century German liberalism and encouraging pastors and teachers to note just how well liberal Protestantism has been doing of late.  This relatively brief book, in other words, is at turns pastoral, hard-nosed, and interesting intellectually, something that’s not easy to do even in a much longer book.  And with his repeated (and very sixteenth-century) insistence that the Bible should be the foremost and the governing source of revelation for the Christian, Cary nicely highlights the central irony of “the new evangelical theology”: although it pretends to transform the soul, in reality, because it’s a function of consumerism rather than an outgrowth of a true theology of divine gift, such theology can only increase anxiety and guilt, never bring the assurance of divine forgiveness.

In short, I can recommend this book to anyone who works with young evangelicals (see previous aside) and thinks that the sixteenth century might yet say something to the twenty-first.  Whether Cary sets the doctrine of Scripture over against individualism or the preached Word over against self-help sermonizing, this book is a breath of fresh air, a clearly written and compelling case against some of the more irritating developments in evangelicalism in my own lifetime.

If you discern that it’s God’s will to pick this up, then let God be in control, and read it! (That was a joke, folks.)

3 comments for “Definitely a Go-To Book: A Review of Good News for Anxious Christians by Phillip Cary”