Programming as a Liberal Art: A Review of Program or Be Programmed by Douglas Rushkoff 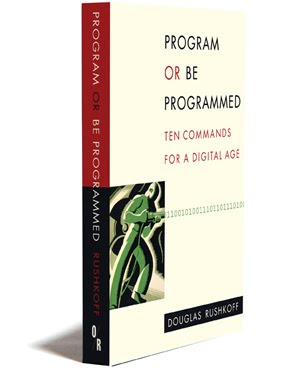 Program or Be Programmed: Ten Commands for a Digital Age

To explain how I came across this book, I have to make a confession: since my family doesn’t subscribe to cable television, the only time my kids or I watch cable TV (or much TV at all, really) is when we’re on the road, visiting family or otherwise.  My son, predictably gravitates to Disney and the Cartoon Network, but I’m a C-SPAN man.  And when CSPAN-2 has Book TV, I’m watching it.  So guess when and where I saw Douglas Rushkoff interviewed about his new book.  That’s right.  When I can watch anything on cable television, I go to Book TV.

Confession out of the way, what makes this book worthy of the Neil Postman Award that it won (I just learned that such an award exists) is its refusal to let any digital technology become transparent, something that’s a mere window through which we see the world as the world happens to be.  From the first Arpanet connections to email to the ubiquitous vibrating phones (and accompanying “phantom phone buzz syndrome”), Rushkoff keeps his sharp eye on the assumptions that one has to make before the technology makes any sense: that one should adjust one’s personal biological rhythms to the atemporal “always on” existence of computer networks rather than vice versa; that the world should conform its complexity to the reductionism of binary choices; and that human beings are meant to exist as infinitesimal nodes in a vast global network, just to name three.  Spelling out those assumptions, Rushkoff does not so much give ten commands as ask ten penetrating questions, questions that ought to haunt human beings as we jump on board the Internet train.

Why ten commands, then?  Rushkoff, whose approach to technology is the same secular-Jewish approach that Neil Postman made famous with Technopoly and Amusing Ourselves to Death, describes the rise of alphabetic writing as a technological change that made intelligible a genuinely new order of civilized life and the Torah in particular as that body of alphabetic writing which allowed the slave-tribes of Israel to develop into a genuine civilization in the ancient Near East.  Likewise, Rushkoff suggests, folks in the Internet age are experiencing a genuinely new kind of consciousness, one as different from the print age’s as the alphabetic consciousness would have been from the oral cultures which preceded it.  His book is set of suggestions to help people navigate the new age the way that the Ten Commandments helped the Hebrews become Israel.  If he were operating in a religious register, such a claim for his own book would be nothing short of ludicrous, but within his own Cultural Materialist framework, there is a certain degree of sense, on a formal level, to the analogy.  A more adequate analogy for the Christian audience, I reckon, is the work that another book, perhaps written by one of our readers, might tackle.

The upshot of Rushkoff’s ten brief chapters is that, like alphabetic language, computer networks do not regulate themselves.  Just as alphabetic writing has the capacity both for glorious Psalms and the vain name-taking that one of the commandments prohibits (I’ll let my readers supply the numbering, as Lutherans and Presbyterians do that differently), computer networks have the capacity both to slow down our processes of ethical deliberation and other forms of serious thought (as the old dial-up connections used to do, Rushkoff notes) or to enslave us to a pace of connection that journalists call “always-on” and the human body calls slow murder.  Likewise, because information flows so easily on packet-switching networks, the Internet has the capacity to serve as the vehicle for a new culture of collaboration and cooperative creativity or as a place where nobody records music or movies because they’re only going to get stolen.  Each of Rushkoff’s first nine “commands” follows the same sort of pattern, first noting the great potential for human flourishing that digital networks promises and then noting the danger for human destruction that the same characteristic threatens.  Obviously this is the sort of cultural ecology that Marshal McLuhan and Neil Postman made famous, and Rushkoff honors his predecessors by showing the same attention to detail that they did, never simply replicating the analysis that McLuhan did of television or Postman of the early Internet but letting the particular observations that all of us should be making determine the shape of the analysis that Rushkoff offers.

The tenth “command” was the most interesting from my point of view because it included an explicit program for cultural renewal.  As many of us who came through the public schools in the eighties and early nineties can attest, “computer classes” used to mean programming: whether it was LOGO in grade school, BASIC in junior high, or C++ in high school, we learned the tools to make computers do things that other people hadn’t thought of before, and although our products were often puerile and sometimes entirely indecent (I hope they’ve discarded those old servers from the early nineties, I’ll admit), still the fact remained that computers were, for us, what Rushkoff calls “anything machines,” terminals that promised infinite flexibility for those determined enough to use it.  Computer education has, of course, shifted since then: “computer literacy” now seems to mean the ability to operate (at a fairly complex level, to grant the point) programs that large corporations have already written, to do audio-visual presentations on out-of-the-box platforms and perhaps (in the really advanced courses) to edit photographs and video using software sold (at a premium) by the Apple corporation.

The point of this brief history of computer education is that Rushkoff wants to see programming reintroduced to the common curriculum, not only for those who are going to be information-systems professionals but for every citizen who’s going to be an educated contributor to society.  Against the conventional wisdom of the Web 2.0 age, Rushkoff insists that there’s no place in a democratic society in the computer age for one class of programmers and a much larger class of end-users; like literacy and mathematics, to acquire a working knowledge of computer code is simply to know the fabric of the civilization that citizens are supposed to help run.  Like Postman before him, Rushkoff calls for such an education governed not by the “specialists” in the field but by computer-literate, generally educated elder citizens, or to put it in our lingo, by digital humanists.

As someone who is not a computer professional (I’m an English teacher, remember?) but who has a working knowledge of some computer languages, Rushkoff’s suggestions resonate with me.  In fact, they struck me as so true that, upon finishing the book, I immediately went to one of the web resources, Learn Python the Hard Way, and started re-educating myself so that I can be a better teacher.  (As I write this, I’ve completed lesson two.)  I’m also lending this book (before this review goes live) to a computer programming professor at Emmanuel College so that he can read it and tells me what he thinks, and perhaps at some point, down the line, we can get going on a cyber-humanist club or some other kind of extra-curricular pursuit that combines insights from Neil Postman and Al Gore and Douglas Rushkoff with Christian-worldview sorts of resources from Arthur Holmes and Ed Cyzewski and Stan Hauerwas.  (Yes, Al Gore wrote a pretty nice book of cultural-ecological criticism.  I reviewed it here.)  Until then, this is one of those books that hit me so hard that I can’t just review it–I positively recommend it.

← The Christian Humanist Podcast, Episode #53: Welcome Back
How Should We Then Link? →

8 comments for “Programming as a Liberal Art: A Review of Program or Be Programmed by Douglas Rushkoff”