The Rhetoric of Repentance: A Review of Telling God's Story 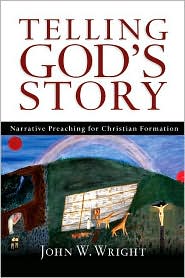 I actually became aware of this book while reading Stan Hauerwas’s Working with Words (which I reviewed here) earlier this summer.  Hauerwas, in an essay on preaching, suggested that the rhetorical character of preaching, its spoken-to-you-right-here character, was a faithful genre for Christian discourse in ways that the academic monologue cannot be.  Then, in a footnote, he suggested this book, and I figured I should check it out.

I should note that, although I preached probably a dozen sermons a year when I was in seminary, I preach only four or five a year now.  In other words, preaching is not my primary public discourse by any means.  (For the sake of comparison, I teach college classes five days a week and lead faculty training sessions eight times a school year in my current professional capacity.)  That said, I’m always interested in preaching  better next time than I did last, and I agree with Hauerwas and with Wright that preaching, because of its particular situation in the life of the Church, the sermon is a moment and constitutes a practice that can shape the Christian imagination even as some in futurist circles decry the genre as obsolete.  Wright in fact names the sermon as the primary site of interpretation (31), taking a stand against theological education that regards academic biblical studies, with its monographs and articles, as the proper place for interpreting text and the sermon as a time merely for “packaging” the work that the academic commentator does.  By taking this stand, Wright articulates a particular theology of the Scriptures, holding that there is certainly a place for books about the gospel of John but that they’re always helpers to the congregation and the preacher rather than standing on their own as logically prior practices.

Much of Wright’s book is dedicated to a theology of the congregation, and his formulae stand in contrast to what he calls the North American narrative, a way of life characterized by individualism, consumerism, and a duality of mind that divides the world between the managerial/objective/scientific and the therapeutic/subjective/spiritual.  Drawing from the hermeneutical work of Gadamer, Wright lays out two visions for the homily, what he calls the comedic and the tragic.  These are not exact analogues of the dramatic genres but instead point to two relationships between sermon and the North American narrative.  The comedic sermon sets forth ways to adjust to the North American Narrative, leaving the basic structures of modern life to stand as given.  There may or may not be jokes, but what a comedic sermon never does is point to the world and say, “Sin.”  Instead, the comedy-sermon suggests small ways that one can relieve the pressure of the objective/material world by means of a temporary retreat into the subjective/spiritual. Wright holds that the comedic sermon has become the norm because of several reasons, among them the removal of preaching from the eucharistic context and its placement in revival and street-preaching scenarios; the personalization (in Wright’s terms, the diminution of the gospel from a cosmic drama) of the Christian message in the course of North American history; and pressures on preachers in a free-market context to please religious “consumers.”

By contrast, the tragic sermon disrupts the order of things by naming the soul-killing nature of the system, letting the people know that the “gods” of the marketplace are only interested in human sacrifice.  The tragic sermon thus sets up a moment for repentance rather than for adjustment-therapy and for affirming one’s place in the system–the idea is to imagine the preacher himself and the folks gathered for worship that they are in fact pilgrims and aliens, that the way the North American Narrative teaches us to imagine the “self” and the self’s “needs” are not philosophically prior to the sinfulness that pervades all historical moments and the vices that give North American life in the twenty-first century its particular flavor.  Because the congregation, as the saved people of God, is already situated within the Biblical narrative when they gather (83), the homily’s role is to remind the congregation that their minds should be renewed in accordance to the forgiveness into which God’s grace has brought them.  The “how-to” section of Wright’s book lays out a rhetoric of the homily based on David Buttrick’s concept of “moves” within the sermon but steers clear of Buttrick’s theological liberalism, which Wright holds as incapable of anything but a comedic sermon and certainly incapable of forming the people called the Church into anything but nice citizens of the liberal state.  This rhetoric of turning, as Wright calls it, starts out describing truthfully (and therefore with some appeal, but not so much that the turn becomes a sucker punch (95)) the vision of human good that governs “normal” life in North America, then moving by means of a transition paragraph into a section that sets forth Biblical alternatives to those visions.  In other words, the tragic sermon becomes a microcosm of the conversion narrative, hence the book’s subtitle.

The last third of the book consists of a discussion of pastoral and congregational practices that go along with the rhetoric of turning, everything from hospitality to Biblical-narrative counseling to congregational Christian education.  Along with the book’s conclusion, which is an extended commentary on Augustine’s De Doctrina Christiana (the great preacher’s manual of the early Church), this finishing section gives a strong sense of the practices that make something like a sermon of turning intelligible, and together they give a strong sense, once again, of how congregational life and the shape of the sermon inform one another.  Wright warns that too many turning-sermons will wear a congregation out and that the turning-sermon should not be every Sunday’s fare (103), but he never does lay out what the other Sundays’ sermons might sound like.  Perhaps he’s setting up demand for a sequel in that omission, but it does make for a less than satisfying experience when, two-thirds of the way through the book, one realizes that one has been reading about “special occasion” sermons without any sense of how “ordinary sermons” might contrast with them.

Wright’s book therefore is not a comprehensive guide to sermon-writing so much as a theoretical exploration, but that’s precisely the sort of thing that helps many of us, myself included, to think about what the practice of preaching means.  Wright’s greatest contribution, then, is to remind the reader that there can be no truthful “how-to” without a prior ethics of the congregation and that the pastor or the priest or the elders or whoever shapes the imagination of the congregation are doing so at all moments, whether in consistent or in hypocritical ways.  Thus repentance is always a practice, the sermon is one component of that practice, and all such components must always fall under the scrutiny of the theologians (whether pastors or priests or elders) whom the congregation calls “preacher” or “teacher.”

← Wisdom is Grace: A Reflection on the Lectionary Readings for 24 July 2011
The Complicated Fall of Post-Charismatic Evangelicalism: A Review of Quitting Church by Julia Duin →