Reading with Friends: A Review of Stanley Hauerwas's Working with Words 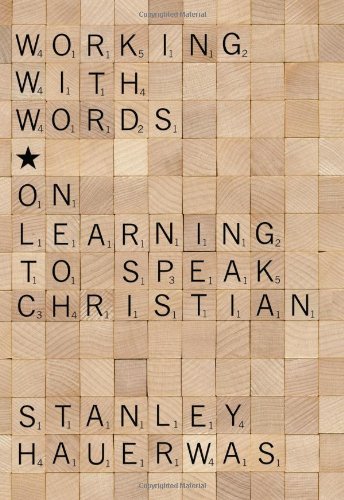 Working with Words: On Learning to Speak Christian

I often review books that publishers and book-review Internet books send my way, but it’s nice once in a while to take a look at a book that I read because I heard about it and bought it.  The nice parallel here is that Stanley Hauerwas’s recent book Working with Words came about because of people like me, folks who enjoy reading Hauerwas’s essays and sermons and who have learned to “speak Christian” to a large extent because of his influence.  (I still maintain that I’m not visible enough to constitute part of this particular “mafia,” but I do consider it a compliment when folks assume that I might be.)  The result of such a book is a collection that does not seem to have any overarching “point” at the outset beyond celebrating the intellectual influences and persistent questions that have animated Hauerwas’s significant writing career.  At the outset of my review I’ll say that this is some of Hauerwas’s best stuff, and that’s saying something.

The end section of the book (my own favorite section) features a series of essays (some co-authored) on Charles Taylor, H. Richard Niebuhr, Alasdair Macintyre, Thomas Aquinas, Papal Encyclicals, Methodist theology, and Dietrich Bonhoeffer.  Each one features the sort of careful thought and rhetorical swagger that has made Hauerwas such a fun read over the years: to the extent that I’m familiar with each of these texts and writers, I can say that Hauerwas opens up new ways to engage them while remaining true to what their own projects are after, and to the extent that I’m unfamiliar, I came away from each wanting to read more.  The essay on Encyclicals particularly struck me as really good material: Hauerwas makes a compelling argument that labeling some of the encyclicals as “social teaching” and others as “teaching on sexual morality” ignores the fact that the Catholic tradition resists a strong separation between the two precisely because its imagination has not been co-opted by Capitalism the way that most modern politics has.  As one of the few intellectual traditions genuinely to resist Liberal Capitalism as well as Dialectical Socialism (because, as a tradition, its memories extend farther back than the inventions of Capitalism and Socialism), the Catholic intellectual tradition thus becomes one of the places where both a strong claim for private property and a strong claim for civil government as an absolute check on mercantile overreach can make sense (240).  In all of this, because this is Hauerwas I’m reading, the reason for the Church’s authority on these questions is not some sense of disembodied “expertise” (a la the Acton Institute’s party line on why Catholic bishops should not call for economic regulations) but because God is God over the markets just as much as God is God over all of creation (239).  The conclusion of the essay, in which Hauerwas proposes that abortion, fair wages, and family are only intelligible in traditions where “woman” is a theological category (254), is a provocative and eminently Hauerwasian place to end, bringing a question forward that I had never thought of as informing such a range of social-intellectual problems.

For a long time medicine is one of the places where I’ve disagreed with Hauerwas, having read his book on theology and medicine when I was a seminarian.  Perhaps because I’m a decade older now but perhaps because the argument is clearer here, his essay on the secularization of medicine in this anthology has almost convinced me that Hauerwas might have been right all these years.  Hauerwas lays out a thesis that the particularly American problem of medicine is that it’s lost the conservative vision that animated Classical Greek and later Christian-era medicine, namely the refusal to abandon human beings (155) even though each one of us is incapable of “getting out of life alive” (155).  He makes perhaps the most controversial suggestion I have yet to read regarding the ongoing debate about health-care expenses and funding, namely that Christians should seriously consider undergoing a sort of medical martyrdom, refusing massively expensive life-prolonging medical treatment as long as the system continues to render the poor and uninsured (often the same group) invisible to the best physicians (162).  Such a martyrdom would not solve the “problem” of medical funding, but for Hauerwas solving the world’s problems has never been nearly as important as bearing faithful witness to Christ and the gospel of the Kingdom of God.  Hauerwas suggests early in the essay that the imagination of supply and demand has made thinking faithfully about medicine nearly impossible (158), and he suggests the new sort of martyrdom precisely as a way to jar the imaginations of our neighbors the way that the martyrs of old jarred the imaginations of pagan Rome.

Perhaps the most helpful essays for my own thinking (which were different from the ones I enjoyed most, specifically the late pieces on Thomas Aquinas and Alasdair Macintyre) were the pieces early in the anthology on Augustine’s Confessions and the book of Acts.  Because I think of Hauerwas’s essays (as opposed to his sermons) mainly as engaging theology as it’s fallen from a sort of Thomistic golden age, seeing a sustained engagement with much older sources was refreshing and helpful.  Contesting a critical commonplace that Acts is a sort of pro-Roman-Imperial sop thrown to the powers that be in order to ingratiate Christians with power and stave off the wrath that falls on the genuinely revolutionary, Hauerwas does a reading of Acts that puts Caesar not in the role of legitimate authority but usurper of the authority that rightly belongs to Christ (57).  On the way there, he notes that the risen Christ, and the mission of bearing witness to the risen Christ (Acts 1:8), constitute a story so revolutionary that even within the so-called benign text of Acts agents of Empire accuse the followers of the Way of turning the world upside down (Acts 17:6).  For the text of Acts, as read by Hauerwas, ultimately the resurrection becomes the central political starting point, and the reactions of Empire to the Gospel as well as the faithful journeys of the saints require the resurrection of the Christ to make sense of them (48).  By the time I had finished this essay, I was eager to re-read and once more to teach Acts in a Sunday school setting.  Perhaps I shall some time soon.

The Augustine essay started out in a way that made me question my own judgment in buying this book (it’s the first full-length essay in the collection), but by the end of the opening piece, I knew I had once more struck Hauerwasian gold.  Hauerwas begins the piece with the strange claim that theodicy, the project of reconciling the reality of evil in the world with the confession that God is love, is inherently an imperial project (13) rather than the sort of thinking that anyone who’s read and internalized the Psalms would undertake.  Unable to decipher this riddle from Stanley the Sphinx, I continued to read on, only to be confronted with a further assertion that pointing to sin in the world can only happen when the larger narrative of fall and redemption is already in place (16).  Now the critique of theodicy started to make sense: because most versions of theodicy have something other than the reconciliation of Creator and Creation at the heart of their conception of “good” (both what a good God acts like and what a good world looks like), they relate only tangentially to the dispatches-from-the-front lamentations and praises of the Psalms, and they usually involve human beings’ presuming to know what cosmic justice and goodness looks like rather than taking on the humility of Job in the face of the divine interrogation on goats and Leviathans and what not.  Therefore, Hauerwas asserts, sin can never be an explanation of the evil in the world (26) but only an agnostic outcry: what efficient causes led to evil we cannot say, but we’re sure going to let God know that it sucks living in a world where evil is dominant.

If this review seems disjointed, it’s because the book itself never does pretend to have a unifying “project.”  But for folks who still think of ourselves as learning to think and to write faithfully, this set of latter-day Colloquies takes on some of the big questions of our day, some of the figures who have influenced my own thought as well as Hauerwas’s, and some of the more enjoyable genres of theological reflection (the sermon and the essay rather than the system or the treatise) and offers the reader some wonderful opportunities to learn.  The volume is probably a bit overpriced (I got it at a significant discount from Wipf and Stock’s monthly email newsletter), but the education that it offers is worth a few shekels.

← Baptizing in a Name: A Reflection on the Lectionary Readings for 19 June 2011
Link-ua Franca →