On to Galilee: A Reflection on the Lectionary Readings for 24 April 2011 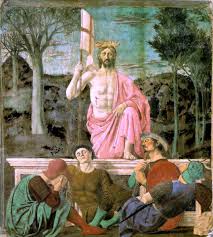 I’ll admit that, in my own judgmental way, I think of the Resurrection of Jesus as one of those moments in the Bible that will reveal in a hurry what sort of Bible reader one is dealing with.  Just about every careful reader of the New Testament will see that Mark has the women telling nobody and Matthew telling the disciples; that Matthew and Mark have Jesus tell the disciples go on to Galilee and Luke has Jesus command them to stay in Jerusalem; that John and Luke have Peter visiting the tomb and Matthew and Mark do not; that differences abound among the accounts.  But the differences among the texts are nothing compared to the differences among readers.  The Resurrection is not unlike Jesus’s parable of the sower, a word that falls differently on different sorts of readers.

The simpleminded will see the differences and assume that, since there is not a singular source-story to be found, that all of it is “legendary,” stories appended to the “tragic” death of Jesus so that simple-minded ancient folks (who are by no means as bright as us moderns) can believe in their magical stories of life after death.  These folks get boring in a hurry.

Some more sophisticated readers might look upon the differences as a sort of divine challenge, the four gospels giving a diligent reader pieces to a jigsaw puzzle that fit together to compose one super-story of the resurrection.  Where details seem to disagree, the interpreter (usually a preacher) chooses the option that gives the best narrative punch.  This sort of thing has been the stuff of most Easter sermons that I can remember hearing–in this super-story, remaining in Jerusalem usually takes precedence over going to Galilee (privileging Luke), the folks who journey to the tomb include not only women but also Peter and John (privileging John and ignoring that John never gets named in John), Jesus always speaks to the disciples after the resurrection (privileging the so-called “long ending” of Mark to the shorter versions in the oldest scrolls), and the content of Jesus’s words tends to be the “Great Commission” (giving Matthew the final word).

Still others focus on the “raw event” of the Resurrection itself, declaring all of the “literary details” of the four accounts to be secondary to the moment itself.  In the one Easter sermon I have ever preached, I’m ashamed to admit that I leaned towards this reading–my sermon spent very little time on the literary particulars of John’s gospel, which was ostensibly my text, and all sorts of time fleshing out the philosophical and theological ramifications of Resurrection as a theological concept.  There’s no overt denial of the truth of the four texts here, but there’s no great attention paid to them either.

And then there are folks like N.T. Wright (whom I had not read at length in 2001, when I preached my Easter sermon), who want to take the Bible seriously as it stands, taking the plurality as constitutive of the Bible’s goodness rather than saying to God, “Thank you for the texts you’ve given us, but they’re a helpless jumble right now–let me show you how they should have been arranged.”  (N.T. Wright, of course, makes this fictional conversation with God far more witty.  Who can compete with British intellectuals in brevity and wit?)  In my own preaching and teaching over the last decade, I’ve tried to follow in the footsteps of Wright in this regard, taking the particularities within and even the differences between the four gospel accounts as seriously as I can and resisting the temptation to “get behind” them or to forge my own Diatesseron because they make me uncomfortable.  I still maintain that God knew what God was doing when the Church handed us four gospels rather than one, and to the extent that I have it in me, I try to dwell in each of the four in its own right rather than negating any of them by refusing to take it in its own terms before I move in systematic directions.

So in that spirit (now that I’ve written a 700-word preamble), I’ve chosen to look at Matthew’s version of the Resurrection, one of two options afforded by this year’s Lectionary listing, and I see not an incomplete attempt to narrate the events of the first Resurrection Sunday but a picture of salvation whole in its own right.  When the Magdalene and “the other Mary” approach the tomb, the angelic act of rolling the stone (how does it feel to be all alone?) has caused the very earth to shake (Greek seismos), echoing the shaking at the crucifixion (in Matthew’s version) and giving Dante material for altering the geography of the Inferno.  The angel himself, brilliant in appearance like a figure out of an apocalypse, frightens the guards into a deathlike state but call on the visiting women not to fear.

Jesus, the angel announces, has been “raised up,” the same sort of thing that will eventually happen to those anointed by the elders while deathly ill at the end of the epistle of James.  The angel invites them to take a quick look at the empty tomb, but the women’s mission is clear: they must tell Jesus’s disciples that Jesus will meet them in Galilee.  The tomb thus ceases to bear any importance: Galilee, specifically the mountain in Galilee where Jesus delivered his famous oration, is what matters.  By the end of the book, on that mountain where Jesus had before told them what it meant to be a city on a hill, Jesus will give his own disciples the command to make disciples, spreading the Kingdom of God not coercively but rhetorically, teaching rather than conquering, or perhaps conquering by teaching.  The presence of the risen Christ will be with them until the end of the age, and their mission is not to bend the world towards the kingdom but to convince those who would be convinced themselves to be bent.

But the mountain should not come too quickly; after all, in Matthew’s version, before the women get back to the disciples, Jesus appears among them.  After greeting them and telling them once more not to fear, and in the midst of their worshiping him, the risen Jesus tells them precisely what the angels had told them, that Galilee is where to go.

In Matthew’s version of the Resurrection, the teaching of Jesus becomes the centerpiece, not only in the text of the Great Commission but in the very geography of the resurrection.  I’ve heard at least two preachers make note that the Great Commission has only one imperative verb, that Jesus commands them to “teach” but merely assumes that they will be “going” rather than commanding the travel itself.  What some close attention to Matthew’s version of things will highlight is that when any of Jesus’s followers is “going,” she or he is always “going” forth from the mountain, from the place where Jesus called for a secret piety and a love for enemies, where the revolutionary blessings upon the meek and the persecuted get paired with the image of the embodied light of the world and the abolition of the right to divorce.  Matthew’s is no incomplete vision of things: as the risen Christ sends the disciples forth, He sends forth lights that are not to be hidden under bushels, salt for the earth who bring a new announcement and teachings that only come to make their fullest sense in light of that announcement, people who can genuinely be the Church precisely because their new Moses is also the Son of Man and the very Presence of God, the God who brings life to the dead, on earth.

May our own lives be sent lives, teaching lives, Gospel lives.

← I Link of Arms and the Man
The Christian Humanist Podcast, Episode #47: Travel →

1 comment for “On to Galilee: A Reflection on the Lectionary Readings for 24 April 2011”