The Theological Datum Is your Friend: A Review of Walter Brueggemann’s An Unsettling God 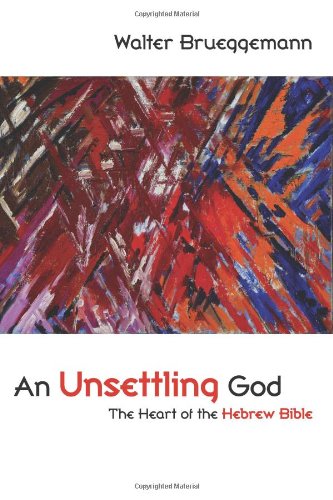 An Unsettling God: The Heart of the Hebrew Bible
By Walter Brueggemann.
212 pp. Fortress Press. $22.00.

I first encountered Walter Brueggemann’s project as a senior at Milligan College, but I really became a disciple of Bruggemann’s in 2000 when as a seminarian I read his gigantic 1997 Theology of the Old Testament

. Here was a teacher who certainly wore his ideology on his sleeve (no friend of the Enlightenment’s arrogance or the national security state’s duplicity here) and whose attention to relationships between texts still impresses me a decade later.  I’ve since had the privilege of attending a few of his public lectures, and this book continues to remind me why being a disciple of Brueggemann is still the most faithful way to read the Bible that I can figure out.

Brueggemann states in this book’s introduction that, after ten years, he had decided to revisit some of the central ideas of Theology of the Old Testament, and at several points in the book he retracts certain points of technical scholarship (that is to say, stuff that’s so specialized that eight years in English lit have rendered me unable to sustain interest in them), but his more interesting project is to expand significantly on his idea of theology as a dialogical practice.

The idea, although it uses a Hegelian-sounding word, is really just a recognition of the relationships implicit in the Bible: for one, the voice known as YHWH becomes known not by rational deduction but in disruptive, memorable moments of revelation.  Moreover, most of the text of the Bible (with very important exceptions) has to do with YHWH’s relationships with the Abrahamic clan, then with the Hebrews, then with Israel, then with the Church.  The continuities and discontinuities in that succession of relationships is worth thinking on, but the common thread that Brueggemann highlights is that YHWH always and only comes to us in relationship with other entities, and each section of the book treats one large category of those relationships.

After the first introductory section, section two deals with “Israel as YHWH’s Partner.”  Brueggemann breaks up the classical Protestant dualism of works and grace in the opening of this chapter and reminds his reader again and again that it’s simply inadequate to the Old Testament.  Israel’s ethical obligations are real and binding, Brueggemann insists, but those obligations only make sense as responses to entirely gratuitous acts of grace on YHWH’s part (38).  Moreover, Biblical narrative tends to follow a pattern, though not slavishly, that gives the lie to the hermetic separation of grace and obedience.  The steps to that pattern Brueggemann lays out thus (52):

Brueggemann argues that not only is the overarching narrative of Israel shaped roughly thus; in addition, the Psalms often reflect this narrative sequence.  And beyond that, texts like Job, which treat non-Israel individuals, often follow a similar pattern (59).  And beyond that, oracles against the nations in Isaiah and other prophets, not to mention the primordial story of the tower of Babel, indicate that the same series of relationships governs how the Bible imagines non-Israel nations (134).  And beyond that still, some prophetic oracles, especially those that envision re-enactments of the Exodus plagues, imagines the same series of relationships governing God’s relationship with the whole of creation (149).  To repeat, Brueggemann is not asserting that every section of the Bible adheres in some sort of neo-classical manner to this pattern; instead, what Brueggemann would point out is that the relational moments (oracle and text, revelation and recipient of revelation, witnessing people and witnessed-to nations) in which the faithful always encounter God extends, in the Bible’s imagination, to every relationship that God maintains with every part of creation.

Brueggemann’s point here is that the Bible does have a full and robust sense of providence, but that providence is always in tension with an equally full and an equally robust sense of real and powerful agency on the part of YHWH’s partners.  In other words, although the most frequent and often the most memorable testimonies about God in the Bible are in regard to YHWH’s power, authority, and sovereignty, for Brueggemann (and as I said before, I think of myself as his disciple), when a theological datum arises to disrupt that larger picture, the faithful reader of the Bible must take heed and resist the urge to erect systems that silence the datum.

Datum, of course, is the singular where “data” are plural.  (My own composition students know well that in my classes, even if not on the cable news, “media” and “data” are always plural.)  What Brueggemann means by a theological datum is one of those moments of revelation in which, contrary to the conclusions to which mortals come, God reveals something.  Perhaps it’s that the sins of mortals actually increase divine wrath, indicating that there was less wrath before the sin and more after and that, therefore, something at the core of divine being really does respond to human agency.  At other times a theological datum might be a story in which a mortal’s pleading convinces YHWH to refrain from massive destruction.  At any rate, contrary to some systematic theologies that make a regular practice of dispensing with such moments as “anthropomorphic” or “primitive,” Bruggemann insists that, so long as they share the page with the texts that support systems of theology, they deserve the same sort of weight as those texts bear, even if that means that the text remains paradoxical rather than neatly sorted.

Perhaps it’s the English major that I completed before I started seminary, or perhaps it’s the sense I have that airtight systems of thought, be they materialistic or theistic, tend to miss some important things about real life, but I remain convinced that this absolute devotion to the text as it stands is going to continue to govern my own theology as I go on teaching and preaching.  Brueggemann’s book concludes with his expressing a hope that this sort of reading will inspire “different questions” (176) from the ones that theology has classically inspired.  If my own career as a Christian teacher counts, it’s working already.