In a hole in the ground there lived a hobbit.

And so he did: Bilbo Baggins, that is. However, the opening sentence of Tolkien’s story could just as easily describe another hobbit–a girl hobbit, who is now referred to be the name “Flo”. Unlike Bilbo’s hole, Flo’s hole was indeed nasty, dirty, and wet–a muddy cave on the little island called Flores. And, also unlike Bilbo, Flo was real.

The story is too big to recount fully here, so I’ll hit the high points. In 2003, a band of intrepid scientists, digging about on the island of Flores in Indonesia, discovered something they hadn’t been looking for: the skeleton of what appeared to be an adult human, except that it was only about three feet tall. The stature of the skeleton was not terribly unusual–genetic dwarfism can produce people of that scale–but the size of the skull was very unusual: it was the size of a grapefruit and it possessed physical features very unlike human skulls today, especially in the jaw and the brow region. 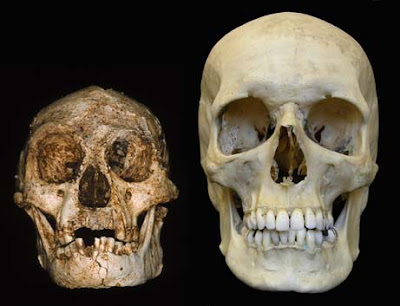 The researchers concluded that this was a new kind of human, not simply a deformed, but otherwise ordinary, human. They named it after the island on which it was discovered–Homo Floresiensis–and dubbed the single complete specimen “Flo”. However, since many of the scientists were New Zealanders, the countrymen of Peter Jackson, the tiny skeleton reminded them of another cultural phenomenon, and so Homo Floresiensis acquired the nickname “Hobbit”.

Of course, the scientists still argue about whether Homo Floresiensis was really a separate breed of human or just an anomaly: skeptics cite such genetic defects as dwarfism and microcephaly as possible causes for Flo’s stature and proportions. (Also there was bad blood between the Indonesian scientists and the New Zealanders, which further complicated research.) However, the arguments supporting the idea of Homo Floresiensis as a distinct type of human seems dominant at the moment. They were not simply apes: though their brains were on a smaller scale than ours, their brain structures associated with higher level cognition were much like ours in size and shape (“The Brain of LB1”). The caves Flo was found in also contained stone tools scaled to her size and the remains of butchered animals, both signs of higher order (i.e. human) intelligence. (This is the most recent research on the subject, and the article that returned my thinking to the matter of hobbits.)

So, it seems as if there was, at least at one time and in one place, a race of people roughly half our size. This excites me. If little people were in Indonesia, where else might they have been? Were they, perhaps, the original brownies, huldufolk, and menehune? I don’t know, given that there’s been no physical evidence of a distinct group of little people anywhere else, but the notion seems more possible now than it did ten years ago.

(Not that the possibility has never been considered: it was a common theory amongst Victorian folklorists and anthropologists that British fairy lore stemmed from dim memories of a more primitive race that once inhabited the British Isles: a race notable for its small stature relative to that of the invaders. For a scholarly take on this, consult Silver’s Strange and Secret People: Fairies and Victorian Consciousness, especially the chapter on “Little Goblin Men.” For a literary imagining of such things, read Arthur Machen’s The Shining Pyramid.)

I must confess, however, that the possibility of hobbits also stirs anxiety in me. What sort of folk were they? Were they our kind of people? In short, were they human in the senses I see myself as human, not only biologically but also theologically? I don’t think this is a question science can answer. Certainly they can comment on the size and shape of brain structures–and they have–but they cannot find a soul in those old bones, anymore than they can find one in a living brain. All we are left with are the physical remains of a creature very like us and very unlike us. Hobbits live in the Uncanny Valley, always a distressing place to visit.

Sadly, I can’t offer answers on this subject. Still, I’m hardly the first to ask it, and perhaps steering our readers to the answer of a wiser man than myself is better, anyway. So, how did Augustine handle this question?

Chapter 8.— Whether Certain Monstrous Races of Men are Derived from the Stock of Adam or Noah’s Sons.

It is also asked whether we are to believe that certain monstrous races of men, spoken of in secular history,  have sprung from Noah’s sons, or rather, I should say, from that one man from whom they themselves were descended. For it is reported that some have one eye in the middle of the forehead; some, feet turned backwards from the heel; some, a double sex, the right breast like a man, the left like a woman, and that they alternately beget and bring forth: others are said to have no mouth, and to breathe only through the nostrils; others are but a cubit high, and are therefore called by the Greeks “Pigmies:”  they say that in some places the women conceive in their fifth year, and do not live beyond their eighth. So, too, they tell of a race who have two feet but only one leg, and are of marvellous swiftness, though they do not bend the knee: they are called Skiopodes, because in the hot weather they lie down on their backs and shade themselves with their feet. Others are said to have no head, and their eyes in their shoulders; and other human or quasi-human races are depicted in mosaic in the harbor esplanade of Carthage, on the faith of histories of rarities. What shall I say of the Cynocephali, whose dog-like head and barking proclaim them beasts rather than men? But we are not bound to believe all we hear of these monstrosities. But whoever is anywhere born a man, that is, a rational, mortal animal, no matter what unusual appearance he presents in color, movement, sound, nor how peculiar he is in some power, part, or quality of his nature, no Christian can doubt that he springs from that one protoplast. We can distinguish the common human nature from that which is peculiar, and therefore wonderful. (CoG XVI.8)

So, there you have it: Homo Floresiensis was mortal–the bones prove it–as well as rational, so far as we can tell from the skull and tools. Ergo, hobbits are people, too! (But so are dog-headed men, and monopods.)

Perhaps not the most satisfying answer, really, but Augustine’s logic can be readily connected to his theology. The marks of humanity are mortality and rationality, thus distinguishing humans from angels (immortal and rational) and beasts (mortal and not rational). Why are humans rational? Because we were made in the image of God: “God, then, made man in His own image. For He created for him a soul endowed with reason and intelligence, so that he might excel all the creatures of earth, air, and sea, which were not so gifted” (CoG XII.23). Rationality is, therefore, what distinguishes the human from the animal. Why are humans mortal? Because, claims Augustine, death is penal, and all who are of Adam’s race die:

For God had not made man like the angels, in such a condition that, even though they had sinned, they could none the more die. He had so made them, that if they discharged the obligations of obedience, an angelic immortality and a blessed eternity might ensue, without the intervention of death; but if they disobeyed, death should be visited on them with just sentence. (CoG XIII.1)

Note that for Augustine, humanity and Adam’s lineage are an identical set, two ways of saying the same thing. Those who read Genesis differently from Augustine, and those who don’t consult Genesis at all, will certainly object to the equivalence of hominids with the Adamic lineage. Still, I think Augustine’s definition of humanity is worth examining, because it isn’t biological, but in fact an interesting blending of the metaphysical and the experiential. The quiddity of the human is found not in the number and orientation of one’s limbs and organs, but in a particular relationship to time and eternity, to matter and spirit, to entropy and order. To live at the nexus of those contraries is what it is to be human.

Apparently, hobbits lived at that nexus with us, though we may have forgotten them,  or never even knew them.  Which leads me to a concluding question, to which I also lack an answer: will we meet hobbits in Heaven? I certainly hope so!

← The Christian Humanist Podcast, Episode #16.1
Remembering and Understanding: A Reflection on the Lectionary Readings for 4 April 2010 →

3 comments for “Hobbits, Monsters, and Augustine”