The tales of King Arthur have fascinated me ever since I first read them, years ago, in a volume of Reader’s Digest condensed books. One section of those stories that always attracted but puzzled me was the Quest for the Holy Grail. To an American Protestant of the late 20th century, this cycle of tales was evocatively alien, declaring itself Christian but expressing that affiliation in strange, unfamiliar ways. According to the version I read, the Holy Grail was the cup from the Last Supper, still containing liquid blood (!). Accompanying it was the spear that pierced Christ’s side, continually dripping blood (!!). And these things were brought to Britain by Joseph of Arimathea (!!!). Apparently all that got left out of my Bible! (Though it was never actually in anyone’s Bible–the Grail story isn’t even apocryphal, much less canonical.)

These years later, the Grail Quest still fascinates me, though it is now less strange than it was. It has become a familiar pattern of story, a narrative that feels normal and natural to me. That’s because I’ve come to understand something of the logic behind the Grail Quest literature. Part of what makes Grail literature so strange is that the reader naturally expects it to be of the same type of literature as the other Arthurian romances–and it isn’t. Grail romance uses the forms and trappings of chivalric romance, but its purposes are different. While chivalric romance tells the stories of knights and their earthly adventures, Grail romance is about a story behind those stories. The knights have earthly adventures, but those adventures mean something deeper: the knights unwittingly find themselves acting out roles of spiritual significance. In short, Grail romance is an allegory in which the characters, for the most part, don’t realize they’re in an allegory. And that, dear reader, is my point in discussing these three character types from the Grail Quest. 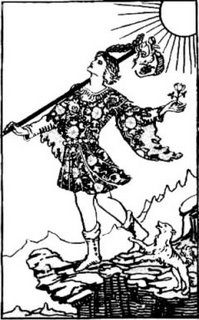 The oldest Grail romance, Chretien de Troyes’s Perceval, is about the Fool character type. Perceval is a simpleton and a naif who knows nothing about what the world is like or how it works, and continually causes trouble for himself and everyone else because of his ignorance. He wants to be a knight, but he doesn’t understand what a knight is; he only knows what a knight looks like, so he imitates the trappings of knighthood but fails to emulate the character and ideals of chivalry. The worst part is that Perceval the Fool doesn’t understand that he’s inside a story, and this recognition is necessary for the Grail Quest. For him, his life is a series of random disconnected episodes with no plot or meaning. It’s all very fascinating, but he understands none of it, least of all his own proper role. He cannot see where he is going, so he is always in danger of stumbling. 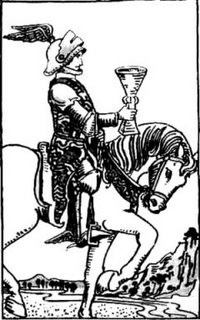 The Knight is the central character of the Grail Quest, and there are many knights in the Grail romances: Lancelot, Gawain, Bors, Galahad, even Perceval, once he awakens from his foolish state. The Knight is dimly aware of the story: he knows he is on a quest–that is, he knows the story’s end–but along the way he wanders through a trackless wilderness of perils and wonders. But despite the mysteries around him, the Knight’s consciousness of the story (the quest) and his role in it (the hero) gives him a sense of purpose. Armed with this knowledge, the Knight can face the trials of the quest with confidence. 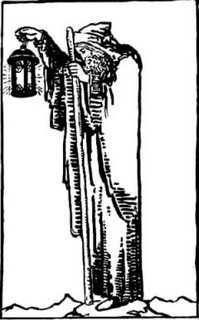 Along the way, the Fools and Knights frequently encounter the third character type, the Hermit (sometimes a priest, an abbot, a nun, an anchorite, a friar–always someone of the holy orders). The Hermit’s role is to explain the story to those who, knowingly or not, are on the quest. After an adventure, a wandering knight will usually happen upon a lonely hermitage in the forest, and as the kindly old hermit feeds him and patches his wounds, he explains to the knight the inner significance of the adventure: the evil knight represented Satan, the imprisoned maidens were the souls of the elect, and the knight acted the part of Christ, rescuing His people from the clutches of the Devil. Because the Hermit sees the story around him, his perception of events is different from the Knight’s, and the Knight is often surprised when the Hermit praises or condemns him for his choices.  This is because the Hermit hardly seems to notice the mundane events anymore: he looks through them, to their higher significance.