A People Ruled by a King: A Review of Kingdom Conspiracy for Brazos Bloggers 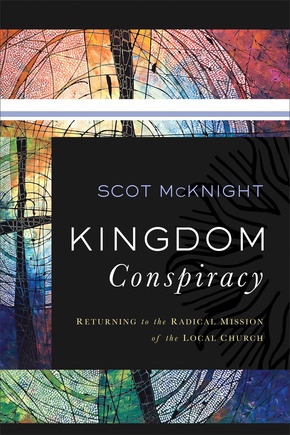 Kingdom Conspiracy: Returning to the Radical Mission of the Local Church

That’s the thought that gets Kingdom Conspiracy going, and on the way to demonstrating the truth of the claim, Scot McKnight both examines Biblical texts (lots of Biblical texts!) for the contours of what “kingdom” means in the Old and New Testaments and some examination of academic and popular theology to arrive at a well-reasoned position on why reticence (on the parts of conservative evangelicals and liberals) to use “kingdom” and “church” synonymously might be ill-founded.

For the Evangelicals: A Different Story

McKnight’s approach to what he calls the “pleated pants” and the “skinny jeans” (1) uses of “kingdom” theologically are not identical because the core error of each approach is a different kind of misuse.  McKnight begins with the problem of grand narrative in the conservative evangelical (“pleated pants”) version before moving on to the Social Gospel/Liberation approach (“skinny jeans”).  (I will not be using the pants-related terms from this point forward.)

McKnight is among the theologians who, like myself, insist upon narrative as a core category for theology.  Using the same basic characters, a theology could tell the story of a world full of isolated individuals, each seeking escape from private guilt or the story of a chosen people, undergoing trials and restoration and even existential changes, and within either of those stories one could cite Bible verses.  McKnight’s plea to the conservative reader is to pay closer to “the story that Jesus himself and the apostles told” (22).  To that end, McKnight schematizes a common evangelical reading of the Bible as a CFRC reading:

Such a schema won’t strike too many as unfamiliar; after all, these four elements are the stuff of catechisms and sermons and praise songs in a hundred churches, and for many folks, such is simply the content of the Bible.  The problem, McKnight suggests is that such a schema ignores most of what happens between Genesis 3 and (in canonical order) Matthew 27.  Furthermore, this version of “kingdom” tends to focus so thoroughly on extra-historical realities (the afterlife and the end of the age) that there’s little room for “kingdom” to have any reality for those who still walk around in history’s current moment.

As a more robust alternative, one which encompasses CFRC but accounts for more of the Bible story, McKnight proposes ABA‘ (a thousand pardons to the typesetting purists, who will no doubt note that A prime should take a different symbol.)  The three elements of that schema are thus:

As mentioned before, the latter schema encompasses the former, but as McKnight relates things, the ABA‘ narrative, because its focus is not on atomized individuals but on Israel, the chosen people of God who become the focus of the Biblical witness in Genesis and remain so in Paul’s letters and the gospels.  In this model, salvation is inclusion into Israel, which is always more than the Old Testament imagines but never less than the Old Testament imagines.  Israel, like the Torah, is never abolished, being an eternal gift of God, but expands to encompass folks from all nations when Jesus of Nazareth brings to fullness the suffering mission of Israel.  Although McKnight doesn’t use this phrase, I read his strong emphasis on Israel as the core of the Biblical message as an affirmation of open and acknowledged mediation.  In other words, the Bible does not pretend (as do many “relationship not religion” sorts) that God comes to the individual human being without also bringing along Temple, Torah, sages, scribes, and a dozen other vehicles that generate as well as transmit meaning.

For the Liberals: A More Rigorous Vocabulary

McKnight spends more time countering liberals than conservatives, and his rationale appears in an appendix (which he labels as an alternative introduction to the book, for more academically-experienced readers).  Because so many young evangelicals have begun to use “kingdom” in ways influenced by (among others) Walter Rauschenbusch and Gustavo Gutierrez, McKnight argues, the separation between “church” and “kingdom” is one that many young evangelicals assume rather than examine, and his section on the history of “kingdom” as a concept is aimed not at stopping the young for doing good works alongside and in behalf of the poor but rather to re-situate those practices in a more Biblical theological framework (239-54).

Kingdom, as McKnight writes over and over, is “a people governed by a king” (69 et. al.).  McKnight produces texts from across the Old and New Testaments to demonstrate that the Bible seldom uses the term to mean anything but a complex entity including both the sovereign and the people currently being governed by that sovereign (73-74).  It’s one of around 100 metaphors for the people-whose-allegiance-is-with-God (75), and when the New Testament uses “kingdom,” it’s just as likely to refer to a current, present-tense reality as it is to refer to a to-come reality (86-87).  The implications are hard to dodge, and McKnight goes ahead and states the claim plainly: “there is no kingdom now outside the church” (87).

The claim is audacious and, after a lifetime of hearing the contrary, counter-intuitive, but the evidence, on the verse level and on the big-narrative level, is there, and McKnight does not shy away from the implications.  In fact, McKnight spends the second half of the book tracing out how Christians ought to imagine acts of benevolence, the relationships between democratic/representative political power and “kingdom work,” and other theological results if in fact the kingdom, in this time between the times, is coextensive with Church.  And much to my pleasure, the second half of his book reads like a commentary on Resident Aliens for a new generation.

Conceiving of ourselves as a polis, as an instantiation of the Kingdom on earth (but, as McKnight insists, not to be confused with the kingdom-to-come, which will do what Kingdom does, but perfectly), McKnight suggests a politics that always names Jesus as its sovereign.  Such a kingdom, in the moment and always awaiting what’s to come, insists upon witness and of hospitality, living as a community that welcomes the stranger, provides for those who need, forgives sins, and does everything that a good king in a good kingdom does, and all in the name of King Jesus.  Such does not make every act of benevolence “kingdom work,” McKnight suggests, but does oblige all who are saved to do such acts of goodness, not because God likes us more when we do so but because we’re free from the fears that keep other folks from so helping.

With regards to the more partisan sorts of “kingdom work,” McKnight suggests that Christians consider carefully the coercive nature of voting, an institution that claims to be the “will of the people” but often represents the worst impulses of the majority and imposes ways of life on the minority that fall far short of “do unto others.”  Whether Christians are trying to impose God’s vision of sexuality or God’s vision of economics on those who have not received God’s invitation, Kingdom Conspiracy suggests, that sort of “lording over” strategy is likely to do more damage to the name of God in the world than good.  McKnight’s vision is for the Church always to practice self-criticism first, in light of the big narratives of the Bible, so that we can present to a watching world a way of life that only makes sense under the rule of the true king.  The aim, in other words, is not to make the world the Kingdom but to be the Kingdom and to invite the world to join in on the fun.

Ultimately McKnight regards Liberation Theology as not much more than a reiteration of the GOP-evangelical axis, both tendencies sharing the assumption that the true site of salvation in the world is not an invitation to live in a parallel community that waits for the fullness of Israel’s promise but a will to impose a version of order on people who have no opportunity to receive or reject that invitation (207). Against that vision of how Christians are to relate to world, McKnight plumbs the Bible for a better notion of Kingdom and ultimately a renewed self-examination of why we do good for our neighbors.

It’s a powerful vision, a church-centered and a Christ-centered vision,and one that I’m going to recommend to a friend of mine who currently assigns Resident Aliens to his Christian Ethics class.

← The Christian Feminist Podcast, Episode #15: Christianity and Sex-Positivism
Christian Humanist Profiles 21: Making Sense of It All →