Deconstruction on the Way to the Kingdom: A Review of The Gospel and the Mind 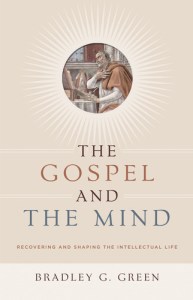 The Gospel and the Mind: Recovering and Shaping the Intellectual Life

Sometimes folks who have recently learned about the synoptic gospels’ emphasis on the Kingdom of God (or Kingdom of Heaven in Matthew, or Kin-dom of God if you’re Tripp Fuller) succumb a certain temptation towards reductionism.  Where other people want to talk about church or goodness or gospel or salvation or any of a dozen theologically weighty words, the one who has newly discovered kingdom-language will sometimes, though not always, say things like “I don’t work for the church; I work for the Kingdom” or “I don’t want to tell people about salvation; I want to tell them about the Kingdom.”  No biggie, I figure: after all, Christians who learn that theology has a strong interest in linguistics often declare strange grammatical fiats: Martin Luther was nothing short of a force in intellectual history, yet in On the Bondage of the Will he invokes “Christ” as an antonym of “free will” (even though Erasmus and a fair number of folks who aren’t Erasmus would posit “fatalism” or “determinism” as the antonym for “free will” and “Christ” as a term that’s supremely important even if it doesn’t have a ready antonym).  And folks who aren’t by any means Martin Luther often fall into traps like opposing “religion” to “relationship,” declaring that there’s no such thing as a “church building,” or decreeing that “Christian” shall not be used as an adjective.  I don’t think that any of these move reflect dullness or duplicity; rather, I see them as evidence that the claims of Christian theology are exciting and world-shaking, and one pious response to such cosmic quakes is to insist that language also change to reflect the new creation which is Christ and which accompanies Christ.

Linguistics isn’t the only place where the grand seismic impact of Jesus and the resurrection of Jesus sometimes tempt people into reductionism, of course.  Politically, folks get tempted to think that the particular sexual politics of Moses or the revolutionary economic politics of Moses can become part of late-modern nation-states’ national law without causing trouble that does positive harm to the cause of Moses and Jesus.  Scientifically, folks get tempted either to recast the work of Jesus in terms of this moment’s theories of how the world works, sometimes rendering Christian theology unrecognizable to much of the long tradition of Christian intellectual inquiry.  Or, perhaps even worse, some insist that this moment’s theories of how the world works give way because a certain reading of the Christian Scriptures does not leave room for such readings of the world.

Bradley G. Green does not make these sorts of political or biological mistakes, and he does not make reductive linguistic mistakes.  In fact, most of his big philosophical points are well-taken for a Christian thinker and provide a good springboard for careful, theologically-inflected thinking.  I would contend, however, that he does succumb to a certain temptation, namely to ignore the possibility that postmodern thought might about language just take Augustine’s notion of the saeculum more seriously than he does, even as he cites Augustine as his reason for opposing them.

Green starts out on a note that I often sound when I think with others about big questions, namely with the fact that networks of rhetorical moves and convictions and modes of argument tend to have at their utmost reaches some sort of “ultimate term,” to borrow from Kenneth Burke and Richard Weaver.  In other words, intellectual activity that’s serious at all is in some sense theological (Green 20).  Green sets out in The Gospel and the Mind to ponder what sorts of vocabularies and common-grounds emerge when the Christian God is, within a rhetorical system, the ultimate term, or in other words when God is the god-term.  Central to Green’s articulation of a Christian philosophy is memory, a central point of inquiry in Augustine’s Confessions and, for Green, a check against the chronological snobbery of the post-war university (46).  In fact, Green’s outlook on the contemporary university is so bleak that, early in his book, he begins invoking Alasdair MacIntyre’s closing thoughts in After Virtue, calling for Christians to prepare for “the new dark ages which are already upon us” (MacIntyre, qtd. in Green 49).  To go post-fall-of-the-Empire so early in the book might seem a desperation move, but I will say, as someone who shares MacIntyre’s pessimism to some extent, that it lent the rest of the book a sense of urgency, even where I disagreed with some of its moves.

Having set the table with that image, Green goes on to criticize three large lapses in the life of the university, each in his account surrendering the robust life of the mind that should characterize good Christian thinking:

As I noted at the outset of this essay, I find much of Green’s work here compelling.  Like Neil Postman in The End of Education, Green does a good job of showing that an inadequate sense of big-narrative will often lead us human beings into self-justifying bureaucratic swamps, in which schools strive for higher standardized test scores because test scores show signs of “performance,” and “performance” means higher standardized test scores.  And like James K.A. Smith’s Desiring the Kingdom, Green shows himself rightly and deeply suspicious of “choice” as a god-term, not denying that “choice” might be a means to avoid certain modes of tyranny but insisting that, without something beyond “choice,” the tyranny of the state gives way only to a collection of mini-tyrannies, a heap of self-contained dictatorships of the will without any sense that there’s a good towards which the polis strives.

But his arguments against postmodern philosophy of language strikes me as less helpful.  Vocation and teleology have in common that they always pull us, in our present existence, towards something beyond our present existence.  If we ever become convinced that our own state, what we became in a past moment, is the point at which one arrives, we’ve betrayed what it means to be called, to strive towards an end that’s not identical with what precedes.  The hope of the resurrection, in both of those cases, is that, when moments have passed and eternity has unfolded, we’ll live not with a calling voice but with some reality that Christians have called Beatific Vision and Theosis and other such things.  But in the meantime, the call is always before us.  While we’re mortal, the end is always to come, deferred to another moment, not identical with things as they stand but beyond the next act of critique and exposure of the contradictions that make our moment secular, not eternal.

My suspicion is that, in his rush to oppose Derrida and the postmoderns, Green has ignored that their project is something along the lines of a postmodern of the secular existence, what Augustine would regard not as the truest sort of being but what we live with until Christ comes again.  My respect not only for Derrida but also for Foucault and Marx and Hegel and many Continental philosophers is not that they offer much along the lines of aspirational visions (even Hegel and Marx are smart enough to realize that what lies beyond the next revolution is unintelligible in our own moment) but that they help to articulate and help us to live intelligently while we wait.  From intelligibility perhaps faithful response can happen, and a life of responding faithfully, intelligently, might never turn the spheres any faster towards the ends of things but might well bear witness to something beyond.

But two out of three ain’t bad (I learned that from Meat Loaf), and ultimately this book was an enjoyable reminder that the content of our confessions bears on all of the intellectual moves that we make, philosophically and rhetorically and poetically.  I imagine that folks looking for a friendly, accessible refresher in what it means to be a distinctively Christian thinker would do well to give this book a visit.

← The Christian Humanist Podcast, Episode #131
What Do You See?: A Reflection on the Lectionary Readings for 13 April 2014 →