Some time ago (too long, really), our friend Todd Pedlar sent along a link to an interesting article about recent trends in Freshman Composition, “Look What Freshman Composition Has Become.”  I took a look at the time but didn’t respond to it on Facebook (where Todd sent the link) largely because the essay takes on a broad range ideas and goes in directions that aren’t identical but relate to each other, so I decided that an essay was probably more suitable than a Facebook comment for responding.

Mary Grabar laments what has come to pass in the sphere of required college writing courses.  In some particular first-year rhetoric programs, as well as in some of the academic journals dedicated to rhetorical theory and pedagogy, Grabar highlights a reduced emphasis on sentence-level correctness, the replacement of formal essays with other modes of rhetorical performance, and in general a sense that “service learning,” a relatively recent (but not entirely new) trend in undergraduate education, betrays what the freshman composition course ought to do.  The blog post wanders about a bit, sometimes switching subject-matters a couple times in each paragraph, as blog posts sometimes do.  (That’s why blogs tend not to get graded by folks like Mary Grabar and like myself, since we tend to evaluate such paragraphs with less than enthusiasm.)

I didn’t feel that I should neglect the big points, but I want to get to the one that I find most interesting, intellectually, so I’m going to give a sort of “lightning-round” treatment to points that I could have responded to with separate blog posts but won’t:

But that’s not what I came here to tell you about.  Came to talk about the draft. 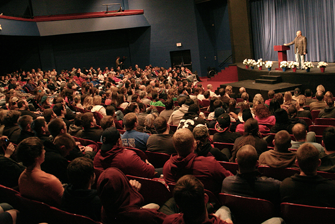 Such a mania for measurement doesn’t just infect the administration, of course.  It’s contagious.  At the risk of advancing another “kids these days” theory, I can’t help but note that one can explain the “Is this on the test” syndrome, the need always to “sell” rhetoric and literary criticism and theology as worthwhile ways to spend one’s time, at least partly in terms of the culture of measurement.  The humanities and the hard sciences and so many other academic disciplines resent don’t figure directly into an algebraic equation that helps them solve for x when x, for them, means increasing those variables in the equations that measure what they think they want (job prospects, finishing their major-course sequences, and such).  And rather than refuse to play that game, we faculty members (and here I’m just as guilty as the next assistant professor) too often try to play the measurement game, convincing ourselves and our students that what we do has, all along, been part of the algebraic equation that students bring along with them, that our course is “relevant” in the “real world.”  (Scare quotes, of course, are the code we use to indicate that we’ve located a non-significant variable in a given system of measurement.)  Please note, O Reader: I’m just as guilty as anyone else on this score, and although I’ve been making a conscious effort in the last few years to “sell” my courses in terms of transformed desires rather than satisfying the desires that students bring with them on day one, I’m not there yet.  The point here is not that I’m better but that what counts as a “good” or a “better” reason to study chemistry or philosophy or art history remains a contested question.

But the humanities and the sciences have it easy compared to the weekly chapel services that many Christian colleges want to maintain as the center of campus life.  If a course in rhetoric doesn’t easily fit into the way that students project their algebraic expectations of “the real world,” at least it has analogues in the curricula of state universities, lending them some credibility by means of common experiences with students’ big-university counterparts.  Not so the regular gathering to sing (or at least be present when other people sing) and hear sermons (or at least inspirational talks, or at least play with one’s phone while people talk) that are supposed to mark Christian colleges as distinct from “secular” colleges.  And like the liberal arts, colleges have the option of making such events a matter of invitation, asking students to allow God, through the ordinary means of grace, to transform their desires so that they desire such gatherings more than a consumeristic system would predict they would.  (Some students, the folks who sit in the first five rows or so of the auditorium’s center section, genuinely do enjoy what goes on in my own college’s weekly convocation service, but they’re a decided remnant.)  But instead, when in doubt, my college, not unlike other colleges, I would guess, turn to measurement.  Thus required chapel service.

I don’t want to make this a simplistic voluntarist/libertarian argument.  After all, I learned to appreciate mathematics as a public-school student not because I started out desiring to know algebra but because my school required me to be in a mathematics class nearly every semester that I was in school, and by the time such things became optional, I wanted to take further math classes not because I had a hankering for calculus as a four-year-old but because I had learned to desire what math could offer by doing math.  (What math could offer was not anything high on Plato’s ladder of desire either, at that point–I knew that calculus would look good on college applications, and I knew that smart women would be taking it.  I had a thing for smart women back then.  Still do, at least for the one to whom I’m married.)  But at the very least the relationship between compulsion and desire remains complex, something that wagers a fair bit of the student’s soul on the possibility that, in the course of doing what’s required, the inherent goodness of the practice will “take,” and something like my adult relationship with mathematics will take hold, one in which the goods internal to mathematical reasoning become appealing enough that I seek them out without the structures that force me into proximity to them.

Of course, Christian worship and mathematics are different games.  Relatively few folks will declare mathematics worthless in their own right; more likely by far is the attitude that mathematics is for “those other people,” not for folks like me.  Worship is different in that there’s a whole publishing industry (including but not by any means limited to blog-publishing) dedicated to declaring the bankruptcy of this or that form of Christian worship.  Ex-evangelicals and evangelical intelligentsia alike know that they can get eyes on pages (digital or analog) by critiquing or even just mocking evangelical piety, and some go as far as to say that requiring chapel services violates Christian freedom.  Thus what colleges attempt to put in place institutionally on the gamble that it might ignite the inert matter of the consumer-capitalist soul becomes, in an ethos that equates Christian liberty with the consumeristic refusal to participate in what’s not immediately attractive, becomes itself a sin of sorts.  So a gamble with the institution’s power to require attendance, hoping to win the desires of those compelled to attend, often enough loses the bet and becomes an active enemy of students whose pieties fall otherwise.

Why state universities would want in on that game I’m not sure, but the same cultural logic seems to govern the service-learning freshman-composition classes that Grabar criticizes.   Like a required chapel service, a required political protest wagers that those students who do not enter college desiring to agitate in behalf of certain partisan causes will, because of their participation in the same, “catch” the spirit of public rhetoric in the protest-mode and become lovers of a certain brand of justice as a result.   Grabar holds that such requirements “verge on illegality or coercion,” but I’m more inclined to say it’s just the same sort of ill-advised wager that required chapel is.  To let students choose their own political involvements entirely, to allow them to eschew political protest entirely or become thoroughly committed to that sort of discourse, is itself a form of politics, and nobody should think that disciplined exploration and liberty are mutually exclusive.

If I might venture another hypothesis,  I imagine that students (and Mary Grabar) balk at such requirements not simply because colleges require public protest or chapel services but also because they menace students’ graduation prospects without becoming central to the “real work” of any given college.  When students approach a college education as a means to an end that they can already imagine, and the college lays on students a requirement that said students don’t become aware of until after the admissions-courtship ends, one should expect resentment.  Moreover, when students can treat such requirements as a “hurdle” to be leaped over on the way to better things, they become more subject to the sort of ridicule and even accusation of coercion that Grabar and Stuff Christian Culture Likes than are those practices for which a college does not apologize but sets forth as the core of who they are.  Compare the treatment that Grabar gives to service-learning freshman comp classes to the ways that folks write about a college like St. John’s in Maryland and New Mexico.  In one case, the student only discovers the requirement to participate in public demonstration when the syllabus emerges, and the only impetus, for the reluctant student, is that graduation might be at stake.  (The same logic holds, too often, for students with whom I’ve spoken about their arrival, often as athletic recruits, on Christian college campuses.)  By contrast, St. John’s makes clear, from the front page of their website to admissions materials and (I would guess) through new-student orientation, that old books are going to be the backbone of what they do, that students interested in a life without such books would be well advised to seek out another college.  Such candor at the front of the process might give admissions officers at small colleges like my own nightmares, and ultimately that wager might be even more foolish than the ones that require public demonstration or chapel attendance, but then again, they might just make us more honest institutions.

As you can probably tell at this point (nearly 3000 words in, and I’m sorry for that), I’m still working out what I think of required rhetoric classes, much less required chapel and service-learning.  As always, I invite and welcome your thoughts, O Reader.

← The Christian Feminist Podcast, Episode 7.1: The Year of Biblical Womanhood
Out of the Graves: A Reflection on the Lectionary Readings for 6 April 2014 →