Blogging through Truth and Method post 13: The Development of the Concept of Language in the History of Western Thought (405-438) 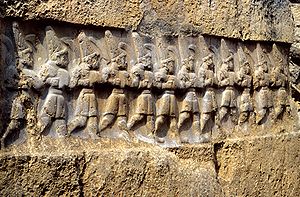 You can generally count on me to look for the historical conditions that surround anything interesting, so Gadamer’s section of Truth and Method on the concept of language immediately pleased me, starting as it does with the ancient Greeks and tracing the ways that the concept “language” travels across ages.  Such investigations remind us that the questions we ask, not just the answers that we assay in response to those questions, are always products of human history and thus available to us (as Gadamer reminds) as parts of an ongoing tradition.

When Greek philosophers started asking questions about language as such, they of course asked in the context of already-present cultural assumptions, namely that “language” whatever that word named, was a system of names that connected with real entities.  In other words, the working assumptions against which the philosophers pushed seemed to be as follows:

The possibility that the sophists and later philosophers explore is that “a word is only a name” (405, italics original).

Plato and the Nature of Experience

Gadamer begins his focused exploration of language as a philosophical concept with Plato’s Cratylus.  Within that diaolgue, two characters propose two ways to understand the ways that names connect to things: one suggests that the name of a thing is entirely conventional, with no connection to the true nature of the thing and thus entirely translatable.  The other suggests that certain names for certain things can in fact be more correct (orthos) than others, thus making some names better than others (406).  The dialogue purports to dispense with both possibilities, preferring an ontology of a thing’s reality in itself rather than as a function of names, which are only copies of things (408), but Gadamer is not ready to dismiss the two theories so readily.  After all, the name of a thing, until challenged, has a certain perfection to it, exhibiting no gap between name and thing in the ways that language-users actually use names (410).  Further, language does not merely function as a system of signs but performs a disclosure of truth, the dialectic motion that Plato’s own dialogic form exhibits (411).  However, the idea that emerges in the course of the Cratylus, that a word is a sign (semeion) rather than an image (eikon) remains as the groudbreaking innovation of Plato’s linguistics.

The range and ambiguity of signs, assigned to things, makes language what it is.  To assign a particular “technical term” connotation to a word betrays the nature of language’s character and development because it attempts to halt the movement of signs (415).  Of course, as technical terms pass into common speech, they quickly enough become normal words again, as Alanis Morrissette’s use of “ironic” and the eighteen years of English-teacher ire that it’s generated demonstrate.  Thus Plato’s insight into words is partial but important: the system of signs that constitutes language not only brings the world into the realm of logos and thus makes it subject to judgments of truth and falsity; language is itself the medium through which we’re capable of having experiences (417).

Thus the Classical contributions to linguistic theory have mainly to do with the nature of a word as a sign: the Greek or Egyptian or Latin word for a thing is not part of its being, but neither does the word become a solipsistic opportunity, a moment for assigning meanings without regards to one neighbor.  Instead, the “meaning” of a word emerges in the course of dialectic, and the sign-nature of a word makes the most sense precisely in that history of dialectic.

Christian Theology and the Theory of Language

The conceptual revolution in in the concept of language happens with a hymn.  Folks who have done some academic Biblical studies know that the opening verses to John 1 are likely a quoted song, some familiar sung words to help a reader launch into a philosophically difficult account of the ministry of Jesus.  And in the course of that hymn, logos, the Greek word whose connotations encompass “speech,” “reason,” “word,” “ratio,” and a few others, becomes flesh, an intellectual move that prepares the way for language to become not only sign-system but also medium (418).

Because flesh (Greek sarx) means mortal existence (among other things, but remember we’re in John, not Paul), for the logos to become sarx is an occasion for logos to relinquish the need to be static idea and to become an event (419).  Thus language, taking its identity from the Savior, enjoys the new dignity that human existence enjoys in Christian theology, becoming itself part of the life of God not as a pared-down, immutable icon of itself but in its fullness, moving around and changing.

Gadamer is no uncritical cheerleader for medieval Christian theology, though; he does note that medieval conceptions of language tend to think of the plurality of languages as a defect of language to be overcome in the eschaton and thus not something to be regarded as essential to language conceptually (421–perhaps they thought the Incarnation essential to the divine life but Pentecost as a concession of sorts).  The partial exception to this pattern is Thomas Aquinas, who appropriates the Plotinian neo-Platonist idea of emanation in order to render language’s source in the divine without languages’ outward movement from the divine becoming a diminution of the fullness of God (423).  And if verbum (speech) emanates from logos (word, reason) without diminishing the latter, then memory, a function of language, can emanate in the form of human speech without diminishing the mind that remembers 425).  Although Thomas regarded the human mind’s movement from one thought to another in time a defect, something to be overcome in the end of things, nonetheless Gadamer recognizes that these theological moves make space for the philosophy of language to go places that, pre-incarnation, no philosopher even considered going.

Incarnation into the Renaissance

In a Christian conception of Incarnation, “the mediation of the incarnation event achieves its full truth” (428).  Jesus of Nazareth grows in stature, in wisdom, and in favor with God and with men, and likewise language does not stay put but develops.  Language does not remain content to imagine formal, logical connections between concepts already in-the-language but expands, discovering new metaphorical similarities and thus creating ripples of changing meaning in the whole system, developing as the language speaks its speakers (429).  Gadamer’s picture here is undeniably compelling, bringing the core Greek idea of the sign-system into engagement with other, equally powerful conceptions of the operation of language and leaving open room for linguistic change and development to be called expansion, progress, deterioration, and a full span of possible movements.

Harking back to Aristotle as he closes the section, Gadamer notes that the best sorts of metaphors are not the imposition of what is not there but the imaginative recognition of what could be there (431).  Understanding of the world actually increases as language continues to do its thing, and even this far out from the end of the book, a picture is taking shape of the nature of truth in the human sciences: Given the Christian expansion of the notion of language, and given the strong Platonic/Aristotelian base upon which patristic and medieval Christian thought builds, the languages of rhetoric and philosophy and criticism take on a role that flows naturally from the character of language, namely expanding the possibilities for thoughts thunk, allowing the world and humanity, the part of world that thinks about world, to continue expanding and unfolding the particular beauties of understanding.  It’s all undeniably Hegelian, undeniably Christian, certainly interesting enough to dedicate one’s intellectual endeavors to.

The final figure Gadamer cites is Nicholas of Cusa, a figure whom I’ve seen cited here and there but not read myself.  (Perhaps I shall remedy that before too long.)  For Nicholas, language goes beyond unfolding and discovery, actually creating knowledge that does not exist before the operation of language (434).  That creative character of language is what leads into the next section of Gadamer’s constructive project.

3 comments for “Blogging through Truth and Method post 13: The Development of the Concept of Language in the History of Western Thought (405-438)”