Making Glorious: A Reflection on the Lectionary Readings for 23 January 2011 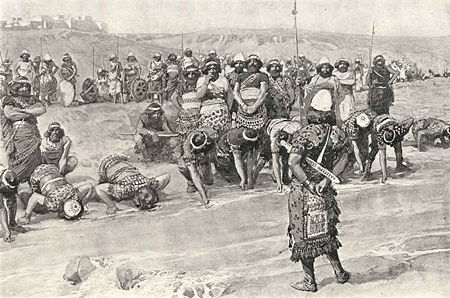 I’ll admit that the final phrase in this week’s Old Testament reading sent me running to Google.  When I see “Day of the LORD” or “Day of Atonement” I know basically what I’m supposed to imagine, but when I saw that the promised end of shame will be like “the Day of Midian,” it took some searching to figure out that the phrase doesn’t appear (that I can tell) anywhere else in the Bible.  Taking the best guess I can take, I figured it must come from the story of Gideon in Judges (because he fights Midianites, not because he rhymes with Midian), and I smiled a bit as I realized that Isaiah here is making reference to Judges 7’s account of Gideon, a story that I’ve heard summarized plain wrong more than one time.

I always have to go back to the text to make sure I’m not just remembering wrong, but the sense seems fairly clear: what everyone remembers in common is that Gideon, chosen shophet of YHWH, has gathered a makeshift army to oppose the Midianites and that YHWH calls on him to be a sign of divine power: he is to take a mere fraction of the force with him into battle.  To determine who will stay and who will go, YHWH performs two trials.  In the first trial, Gideon asks who among the warriors of Israel is afraid.  If a man fears, that man goes home.  So far, so good.

Then people start to misread.  People think that, since the first trial must have been one of courage, one of the classical virtues, the second must be a trial of temperance, another of those classical virtues.  But it’s another sort of separation.  When the soldiers go down to the water, most of them, being courageous, also exhibit a bit of self-control, drinking as human beings do.  But three hundred of them apparently declined flight not out of noble virtue but out of bestial stupidity: they dip their entire heads in the water, lapping the water as dogs lap.  Those three hundred, God insists, will be the ones who take up arms as YHWH’s army, proving that YHWH, not classical discipline, has won the day.  And they do win.

The subtle insult that YHWH gives to the remnant of Israel here is not hard to understand: just as a small pack of dog-men has no real ability to break the back of the Midianite oppression, so the men of a Jewish ghetto have no weapons that can do real harm to the mighty Babylonian empire.  Yet YHWH will save, and YHWH will save in such a manner that history can scarcely credit a great Jewish general, the collective will of the people formerly of Judah, or any such thing: this will be a divine actum, and they will know that YHWH is Lord.

When Matthew in turn takes up this Isaiah text, when allusion becomes allegory, he pairs up this moment with one of the most underused phrases that I can think of in the Bible.  Folks immediately think that fish in Jesus’s famous statement about fishing for men must mean something roughly synonymous with “converts,” and the promise to Andrew and Peter is that they’ll be the first door-to-door Christian prosyletizing team.  But placed next to that famous moment in Isaiah, which in turn makes reference to that famous misreading of Judges, the phrase suggests to me something more akin to the moment in Amos 4 when YHWH says of Amos’s prophetic activity that it will lead away the wicked among the nations on hooks, an image of divine judgment rather than salesmanship.  I don’t think that such a reading means that public proclamation of the gospel is a bad thing; far from it.  It just makes me wonder how eager one should be to think of one’s neighbor as a fish.

The point of all of this hyptertextual reading is to note that Israel is always thinking about Israel, and the Church is forever thinking about what it means to be and not to be Israel.  It’s also a reminder, to me at least, that to be Israel is not to be a powerful or a clever or even a self-disciplined people but to be those people selected, perhaps scandalously, to bear witness to those people not selected.  It’s an inscrutable picking-of-teams that puts someone like me in the position of saying to people better than me in many important ways that the God of creation and redemption has saved the world and that judgment is coming on those who would oppose that salvation.  It’s a strange story, really.  But it’s also unquestionably glorious.

2 comments for “Making Glorious: A Reflection on the Lectionary Readings for 23 January 2011”