Jesus in the Far East: A Review of The Revelation of the Magi for HarperOne 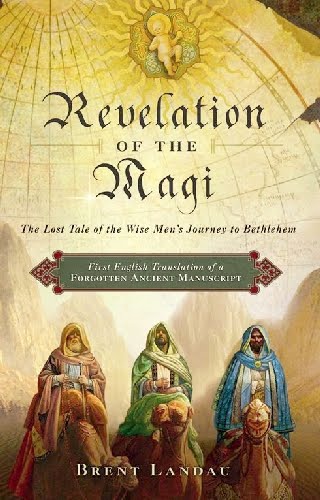 Revelation of the Magi: The Lost Tale of the Wise Men’s Journey to Bethlehem
Translated by Brent Landau
157pp.  HarperOne.  $22.99

When I discovered Midrash as an undergraduate Bible minor, I was immediately fascinated. The Rabbinic practice of expanding upon the Biblical text, providing details and linking characters based on linguistic connections (the old Rabbis did not believe in linguistic coincidence) seemed to me, someone freshly interested in postmodern philosophy and reader-response literary criticism, as evidence that those impulses were neither novel nor illegitimate but simply forgotten in the heady days of the Enlightenment. (I’ve since made peace with the Enlightenment, but I still think that the best of what we call postmodern has roots in Rabbinic and Scholastic practices.) When in seminary I discovered that our library had a multi-volume collection of Rabbinic Midrashim, I made a point of visiting those volumes every chance I got, and although I never did work them into my thesis, they were a companion to me all through my seminary years.

The Revelation of the Magi, although it’s a Syriac Christian text rather than an Aramaic Rabbinic text, has the same impulse as do those wonderul Midrashim: they take a tale of only twelve verses, a story whose characters have no origin save a direction (east) and a title (Magi) and whose plot tails off without any concern for what happens to them after they leave Bethlehem (T.S. Eliot poem notwithstanding) and crafts a wonderful and fantastic (in some older senses of both of those words) narrative that, until recently, remained untranslated from Syriac, waiting in the Vatican Library for Brent Landau to come along and put it in my hands.

Because my own scattershot history-reading always informs my Bible-reading, I’ve assumed for some time that the Magi from Matthew must have borne some relation to the Magi in Herodotus, the old ruling class of the Persian Empire. In my own imagination, their appearance, even had they not mentioned the phrase “King of the Jews,” would have made Herod quite nervous: after all, he had just been installed as King of the Jews by Marc Antony at the culmination of a bloody war with the Hellenized Parthian Empire. No doubt Herod would have recognized that the Magi were prominent persons in that still-looming empire, and when they started proclaiming that a new “King of the Jews” was on the way, he predictably took that as a threat to his own precarious throne.

The Magi in Revelation of the Magi (RM), it turns out, are not those Magi. Using etymology that Landau cannot discern in Syriac or Greek, RM explains to the reader that they’re called Magi because they pray in silence. The text is not unaware of the Persian Magi or that the term Magi had come to mean simply “sorcerer” in popular usage. In fact, they have to deal with the inhabitants of Jerusalem’s mistaking them for those Magi when they arrive in the city. But these Magi do not come merely from east of Bethlehem or from “the east” connoting former Persian lands; these Magi come from Shir, a legendary land at the far Eastern extreme of the world, a place where Seth, the third son of Adam, traveled with his aging father and learned the secrets of true worship lest they be lost in the fallen world. These Magi have lived near The Mountain of Victories and kept Adam’s secrets in The Cave of Treasures of Hidden Mysteries for generations, waiting for the appearance of the star that Adam prophesied would bring them salvation from the evils of the world. And so they do, for generations, until a star appears to them while they’re in the cave.

So that folks will want to read this book, I’ll refrain from further plot summary, but as the story develops, and as the Magi travel from Shir to Jerusalem and then to Bethlehem, the Syriac writer(s) weave throughout the story phrases and motifs from the New Testament, demonstrating an exquisite artistry with the sacred text that is a delight to read even for those who “know how the story ends.” And to prove that old texts have their own warped sense of humor, there’s even a baby-switch gag in which Mary panics because she sees one of the Magi’s mystical vision of Christ and thinks that he’s kidnapped baby Jesus. Of course, when she finds the real Jesus back where he should be, the infant gives her a long speech providing her anxious soul comfort. (Yes, you did just read that.  You really want to check it out now, don’t you?)

Landau’s translation, whose endnotes provide an exhaustive set of New Testament cross-references (which are not as useful because Harper saw fit to cut the pages unevenly for archaic feel rather than for endnote-checking ease), does not shy away from familiar King-James-flavored constructions, and the experience is a genuinely enjoyable Midrash on a familiar mini-episode from the New Testament.

Were this review simply of Landau’s translation and scholarly apparatus, I would have few reservations. However, his introductory and concluding essays make some moves that I really ought to call into question. In the midsection of the story, when the star appears to the Magi and beckons them to Jerusalem, the mystical Christ speaks about his omnipresence and ability to appear to the folks in Shir:

And I am everywhere, because I am a ray of light whose light has shone in this world from the majesty of my Father, who has sent me to fulfill everything that was spoken about me in the entire world and in every land by unspeakable mysteries, and to accomplish the commandment of my glorious Father, who by the prophets preached about me t the contentious house, in the same way as for you, as befits your faith. (13:10)

Landau’s footnote to this verse as well as the volume’s concluding essay point to this as evidence of an early “theology of the world’s religions” and speculates that the final episodes in RM might have been later scribal addenda geared towards taking the sting out of such an intellectual novelty. The problem I see with Landau’s approach is that he seems to apply a very modern understanding of “faith” without giving any lexical justification. In modern times, of course, phrases like “interfaith dialogue” and “faith-based organizations” are relatively commonplace: “a faith” in this language-game is Islam, Christianity, or something bearing resemblance to them, and there are a plurality of “faiths” in the world. In legal systems that recognize a plurality of incommensurable “faiths” or “religions,” such a use makes perfect sense, but in an intellectual context that knows syncretism but not pluralism, such a move seems strange.

Landau’s use of “faith” has some English attestations in the Middle English period (OED places one such use in the fourteenth century but does not find another until the mid-sixteenth), but Danker’s Greek-English lexicon does not indicate any such use in Biblical-era Greek, and I wish Landau had provided some evidence that Syriac as a language was in fact making late-medieval moves rather than just assuming that fifth-century “faith” was the sort of nineteenth-century “faith” that he seems to assume. More plausible, I would think, would be something related to the ancient use of the Greekpistis to signify a complex relationship between political loyalty, existential orientation, and public confession. After all, that use of “according to his faith” is already present in the Pauline literature (in the sense that each Christian is given Spiritual gifts “according to his faith,” and there’s less of a stretch involved if one assumes (yet) another Pauline echo rather than imposing modern-era religious pluralism on the ancient text.

One ought not judge a book by its front-matter, and in the spirit of letting the old book stand on its own, I can recommend this text for a fascinating look into the Midrashic mind of early Christianity. For the sake of disclosure (and to explain the post title), HarperOne did contact the CHP hosts about reviewing this book, and I did receive my copy free of charge. My review here, as in all my book reviews, is the truth as best I can tell it, and I did not think differently or pretend to think differently because I got a new book.

← The Christian Humanist Podcast, Episode #36: The Incarnation
A Link in our Armor →

2 comments for “Jesus in the Far East: A Review of The Revelation of the Magi for HarperOne”